When we bought our home this is what the master bathroom looked like. 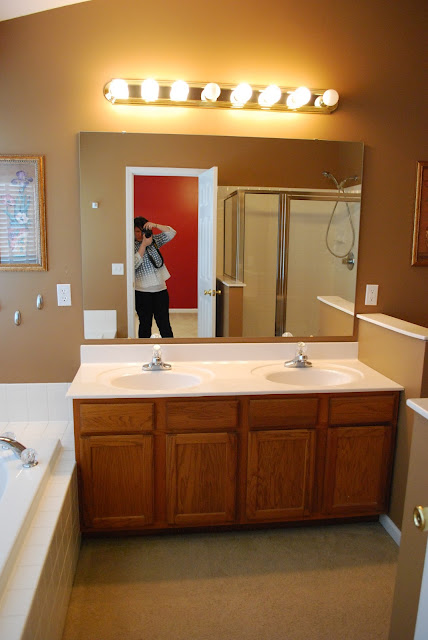 No, your eyes are not deceiving you. That is most definitely carpet. In a bathroom.  Yes, I shuddered enough already for the both of us. 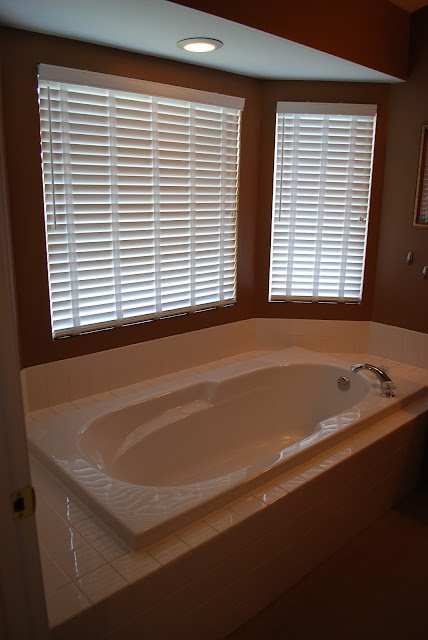 Besides painting to update the space [Kendall Charcoal by Benjamin Moore], we decided that because we were replacing all of the flooring in the rest of the home that later on down the line we would tile this room.  I decided to live with the carpet for awhile and save up some pennies to replace it.

Well, that didn't go quite as planned.  Of course!

I got an idea to *just* replace the vanity for a taller one with more storage.  The old vanity was actually two vanities pieced together with faux drawers and it was terrible set-up for storage that needed to be functional for pulling things out daily.  It simply wasn't practical.

After looking all around the internet I decided on this Allen & Roth one from Lowe's. 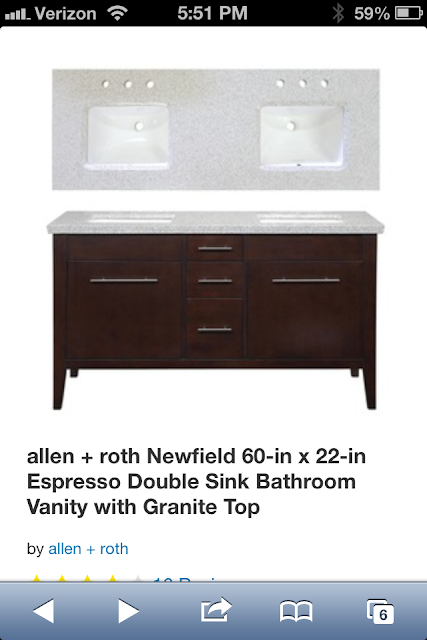 It was an easy buy because it was under $1000 for the vanity + countertop.  It had three drawers plus cabinet shelving for storage so I was sold! Other ones that I had priced had countertops that were more than $1000! Not in our budget.

My plan was no fail, or so I thought.  We would take out the old vanity and replace it with the new vanity until it was time to tile the floors.  Easy enough, right?

Well, once we started to rip out the vanity we discovered pretty significant water damage on the wall.  Then we also noticed some mold on the floor and decided to replace the toilet.  Thanks to David, my step-dad, and father-in-law, the mold issue was rectified and the wall was repaired with new drywall.

I guess you can see where this is headed...

One night while we were at Home Depot and I saw some 12x24 marble tiles that I loved.  We bought them up, took them home, found a tile guy through a reference, got a bid, and had the tile laid in about a week!

It was not the way I expected things to go but I guess that's the joy of homeownership!

Ultimately we are so happy we found the mold issue from a previous leak and are pumped to have that nasty carpet out of our way.  We really loved the way it turned out even though the room's not quite finished.  I still need to find a light and hang the new mirrors I scored at HomeGoods [not pictured just yet!].

Oh, and I mentioned on Instagram that David and his dad installed a TV in the room and it's pretty much the greatest thing ever. I mean, I feel like a celebrity or something.  Dream come true, people. 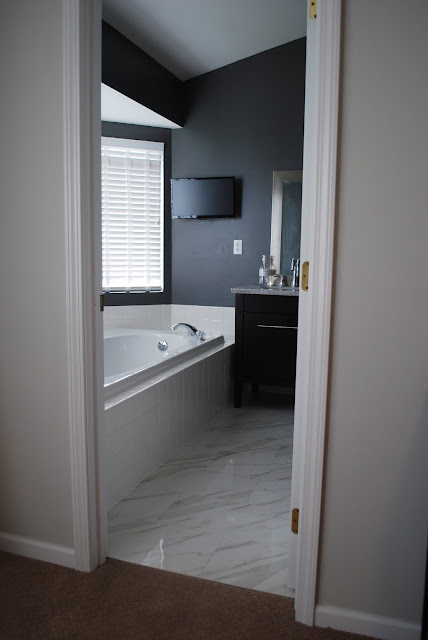 We had the tile laid in a subway pattern and used a pale gray grout.  Never again will I use white grout! Lesson learned in our first home, that's for sure! 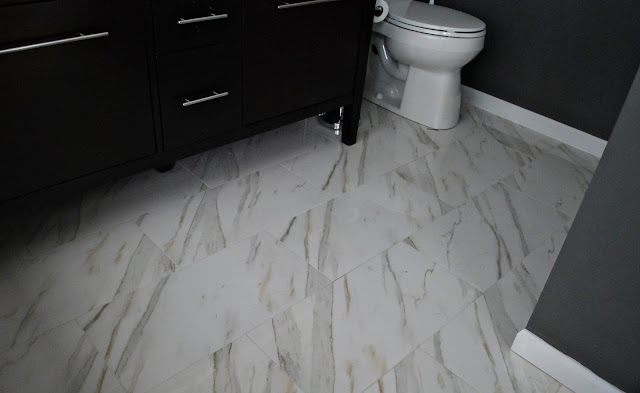 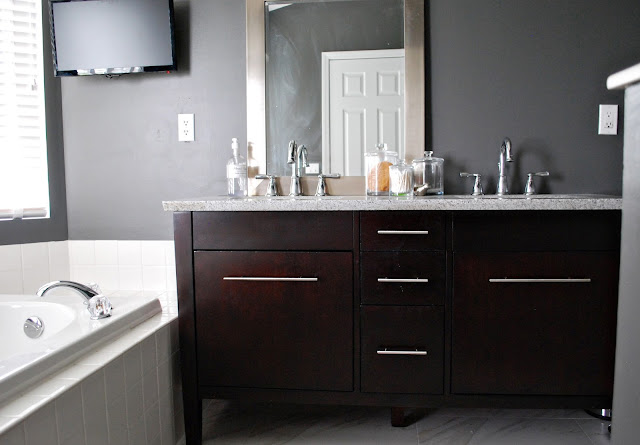 Sorry for the streaky mirror! 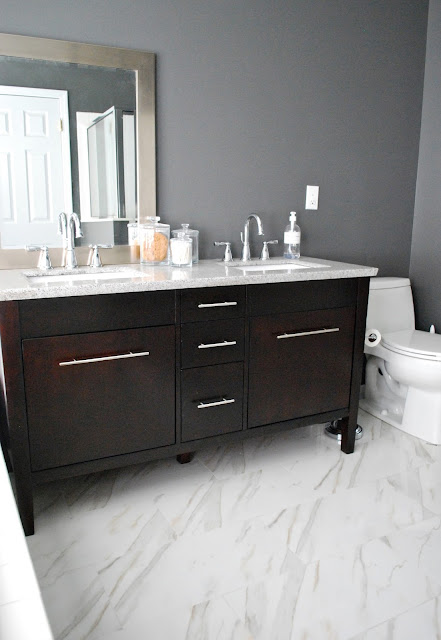 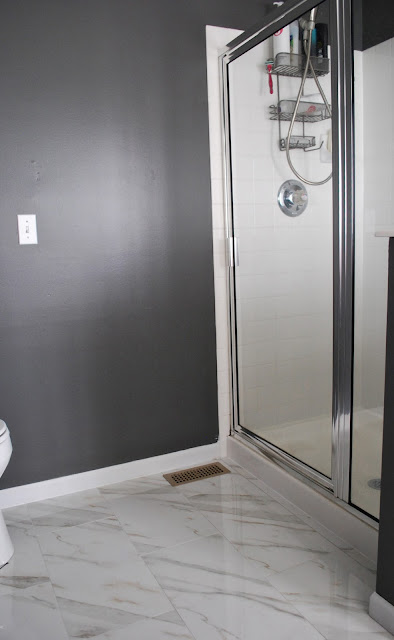 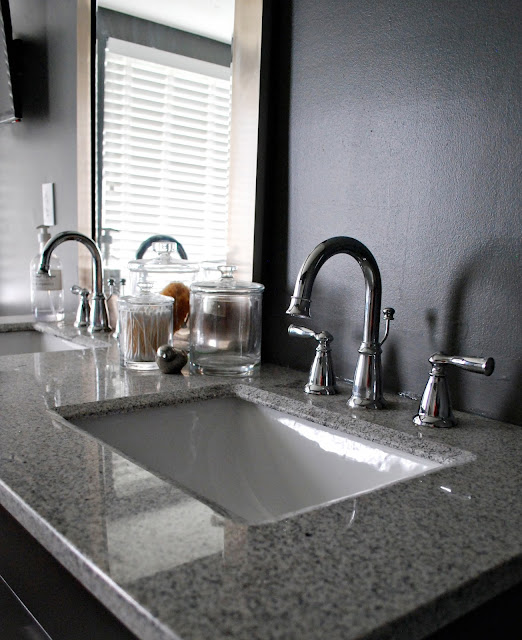 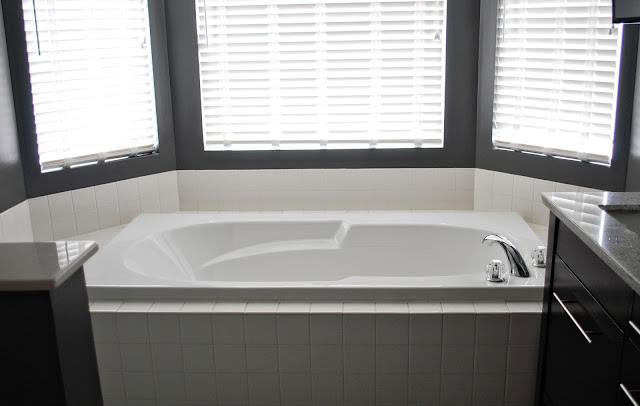 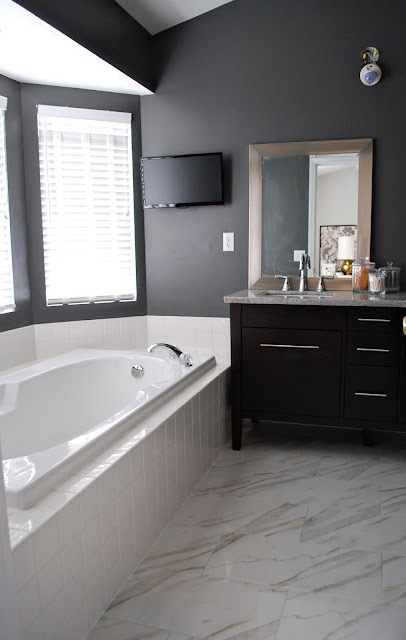 So that's where the master bathroom stands as of today.  When we get around to decorating it and making the finishing touches I'll be back to share those details with you all.

Thanks for stopping by today. I'm having lots of fun decorating our new home!

I shuddered when I saw the carpet and then laughed when I saw your comment! The bathroom looks amazing. That marble tile is to die for!

OMG it looks amazing! What a good (and unexpectedly fast) makeover! Love the dark vanity with the light floors :-)

It looks so good! Such great colors and finishes- it looks totally different! I'm so super jealous of your handy family. :)

Ooo, those floors and that wall color! Good life decisions!

What a transformation! It looks awesome, Joi! I always get so excited when you post - you never disappoint!

Those floors are seriously FABULOUS. They look amazing with that vanity, too.

And the tv is too stinkin' cool! You are a celebrity.

It looks beautiful! Those floors are gorgeous, and I love the vanity!

We have carpet in our bathroom (since we're living in twin houses you know), and we want to do tile ASAP, but I feel like we have to decide on just scrapping the whole bathroom and starting fresh, or just doing the floors. And I can't make that decision yet :)

Joi I love that tile! I would love a TV in the bathroom, but I already take forever to get ready. If I had Bravo on distracting me I'd never leave the house! Can't wait to see more pics! XO

Must.have.those.marble.tiles!!! It all looks amazing, even undecorated! Can't wait to see more. That TV in there?! It's like Cribs up in here.

HAHA!! I love your tv...we won a tv in a charity that ended up in our kitchen and now I want one in the bathroom, too...we had one in the bathroom in our hotel room in las vegas once and it was my favorite thing. I dont even watch tv that much but something about it is so novel and fun to me. I am glad somebody shares my enjoyment over this - most people stare at me blankly when I tell them I want a tv in ever room in the house (laundry room too, you bet I have that pinned on Pinterest!!)

Anyway aside from that the bathroom looks amazing. The first picture is your classic setup I see all the time. We haven't bought a house yet but every time I see those bathrooms on the MLS I wonder how to change it up. I am amazed at what a difference it made... Good job!

Looks fantastic. It looks alot richer than before. Crazy about all the water damage in the bathroom.

I really thought we were the only people on the PLANET to have carpet in our bathroom. LOVE the new tile! (totally wish my hubs would gut our bathroom, but sadly, not yet!)

Holy gorgeous, lady!! That is one amazing bathroom! :)