This past weekend David and I headed on over to the Missouri side of the Mississippi River to partake in yet another home tour. To say I was super excited was quite the understatement. It was boasted as a mid-century lover's dream and I find myself really drawn to that era, probably because of it's interesting shapes and attainability. As you know, we live in a ranch home, too! : )

The walking tour consisted of 5 interior home tours and an exterior tour of the rest of the homes in the neighborhood. We had gorgeous weather and the homeowners were so hip. They chatted us up about their homes and were overall pretty inviting. As David pointed out, there was not a single monogram in sight. Which, pertains to last week's home tour, in which we saw monograms around every nook and cranny! David actually talked to the homeowners this time around and claimed he had fun because the people felt less pretentious. I can dig it. : )

First up was this fun house with the purple door. The owners were middle aged and very chill. 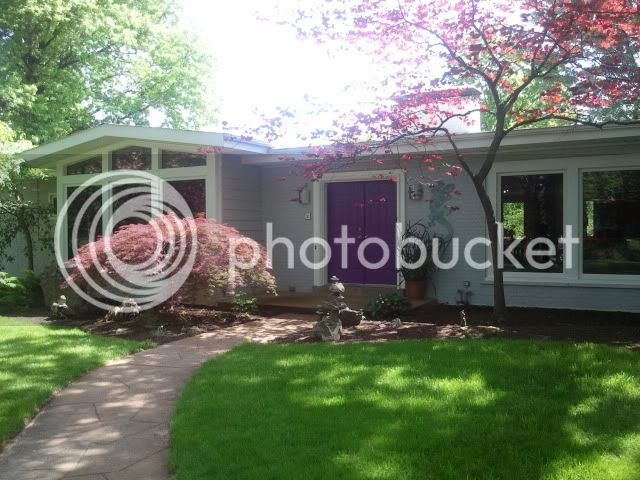 They had the cutest cat that looked like a dog {wow, I can't believe I typed that because I'm SO not a fan} and a real arc lamp! 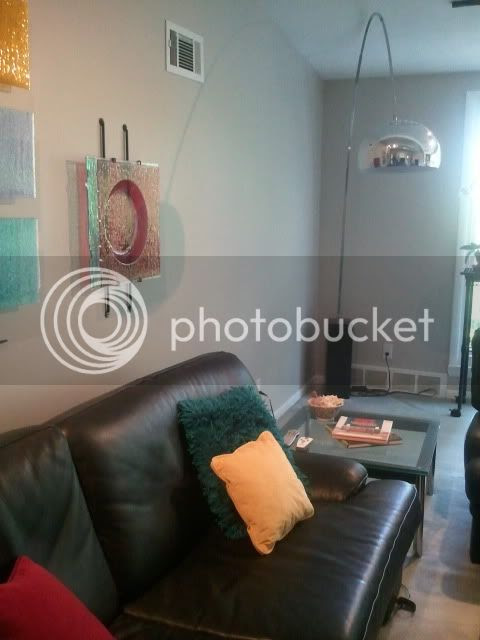 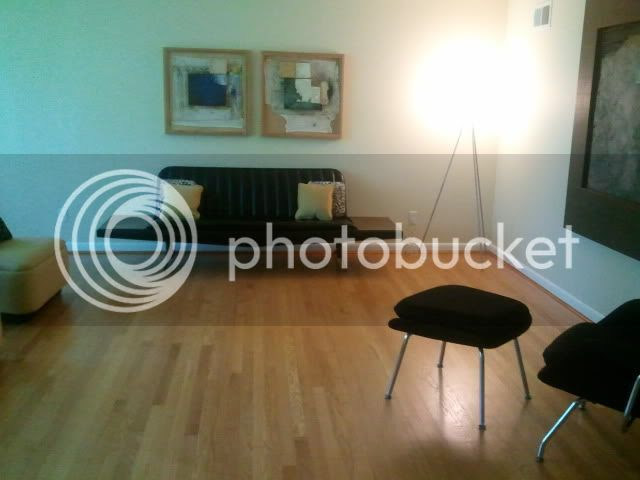 Next up was a younger couple, maybe a couple years older than me and the mr., who recently moved to the Stl. 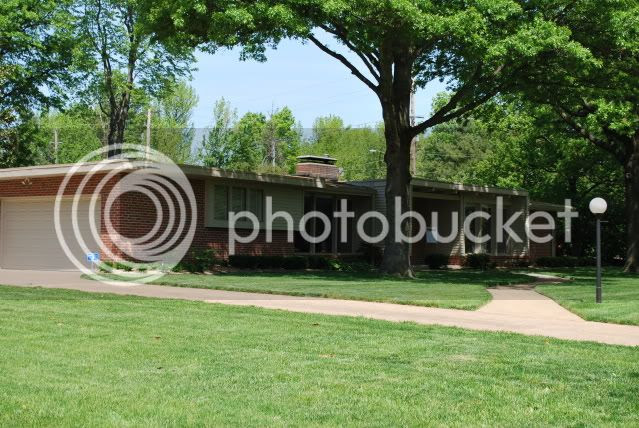 I liked their dining room chandelier and they obliged my photo requests. 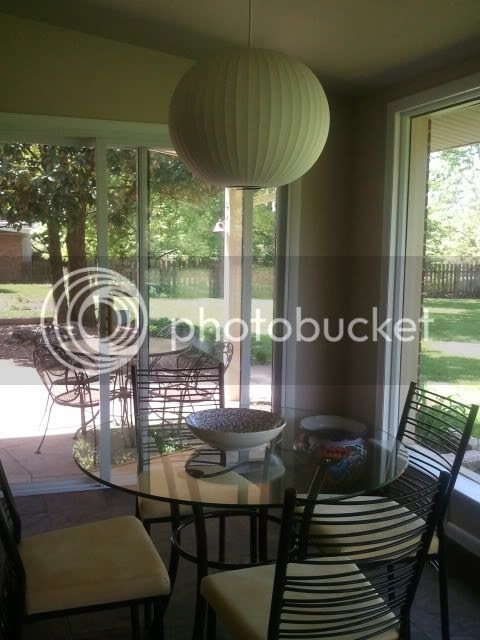 Only later would I discover that this homeowner is the grump of the 'hood. Guess there's one in every bunch!

Next up was the house on everyone's radar because of its preserved kitchen in its original
state. 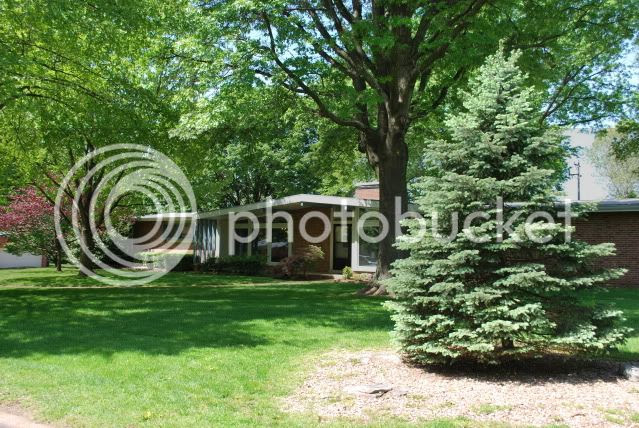 Talk about a teal explosion! It was very, very cool and I loved it! 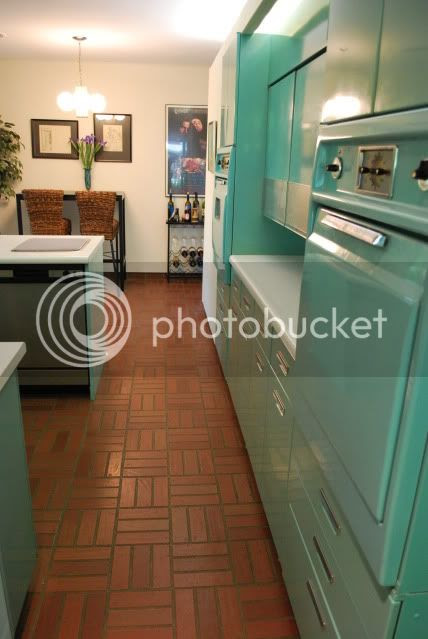 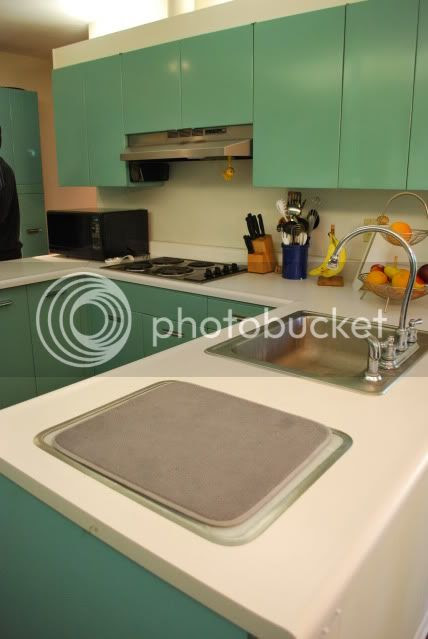 I also fell in love with their front room random art arrangement, with the long dark stained wood ledge as a border. 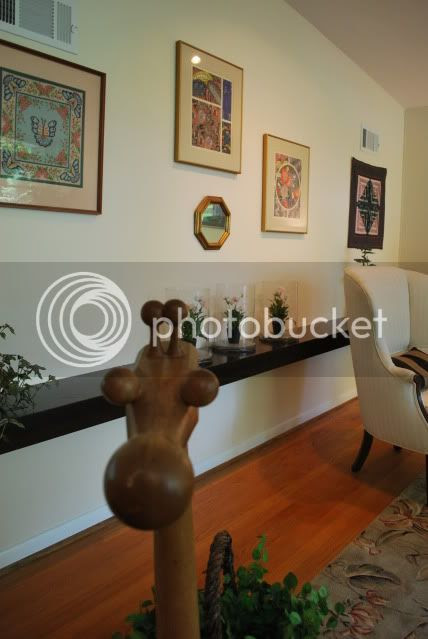 The 4th house was my favorite of the bunch and wouldn't you know it, I forgot to snap an exterior shot. Oh well, the inside was where it was at anyway!

I'll let the photos do the talking...I seriously loved it all! 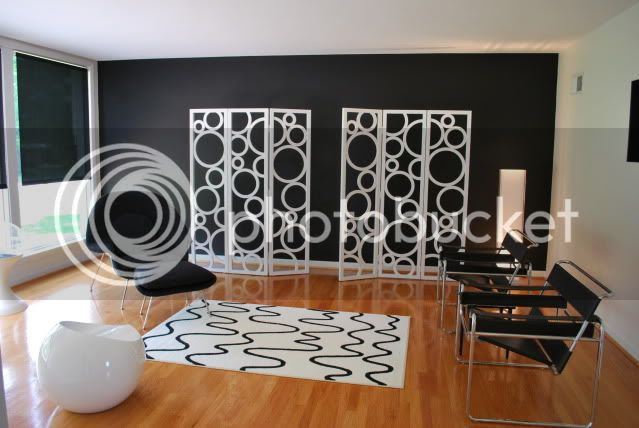 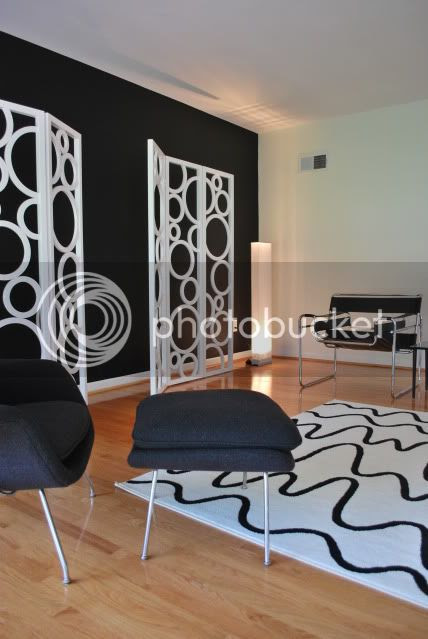 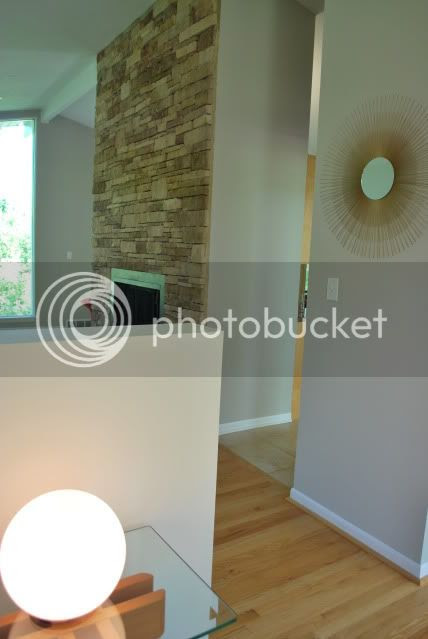 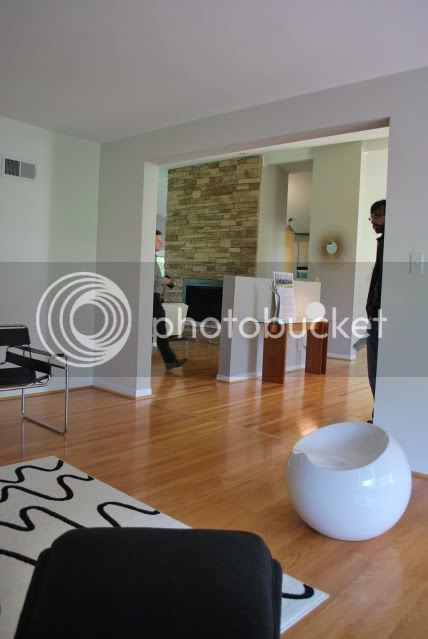 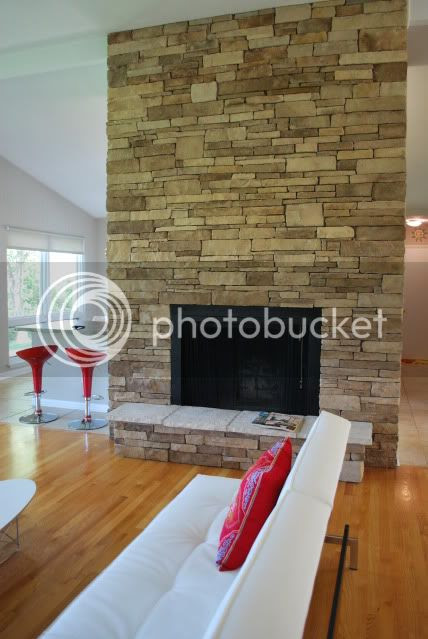 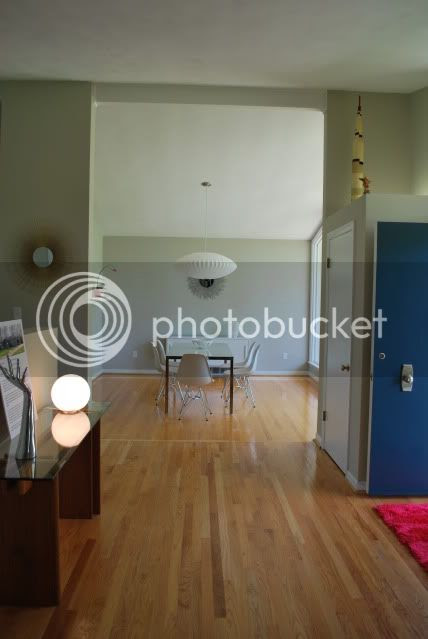 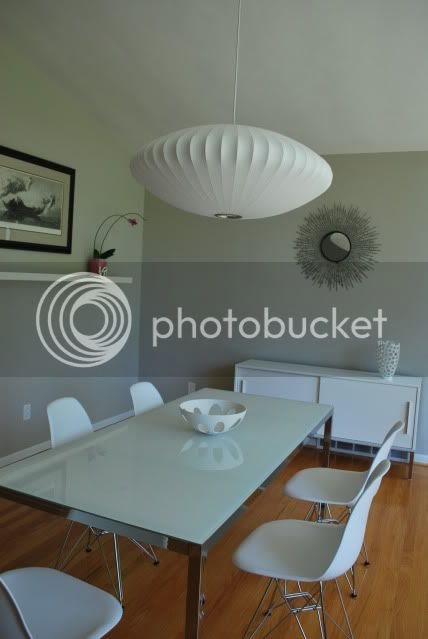 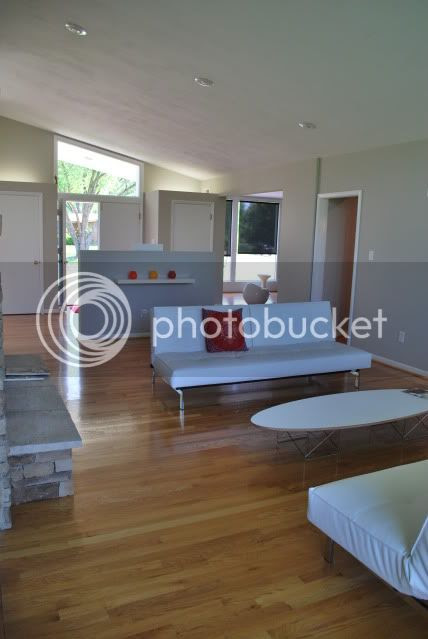 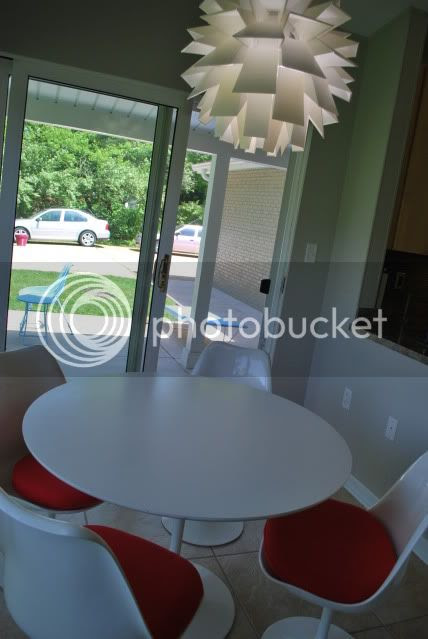 I wanted to snatch this vintage magazine up so bad! It was loooovely and those colors seriously spoke to me! : ) 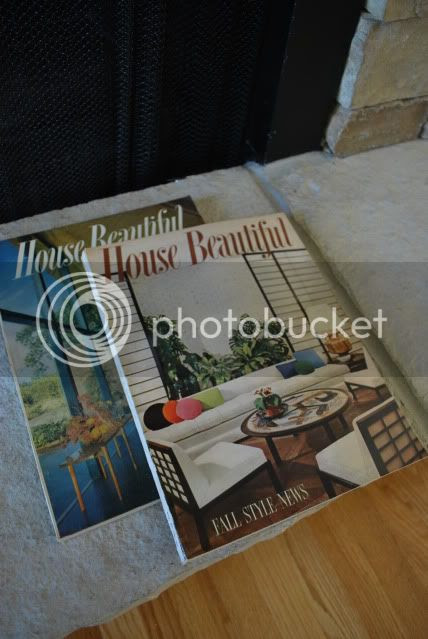 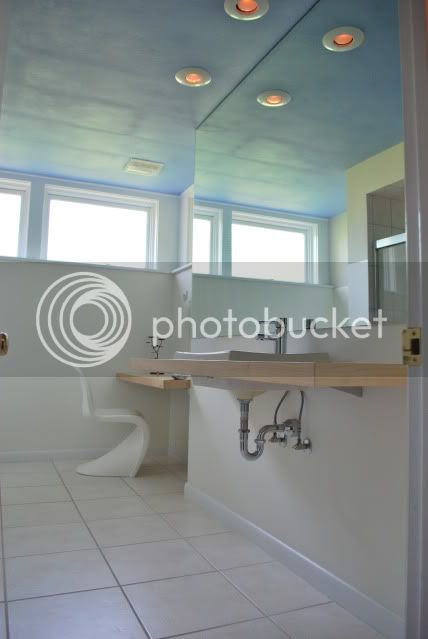 On our way back to our car we spotted this home, not include on the interior tour, with the big "5" number on their exterior. I love this large way of displaying your address! 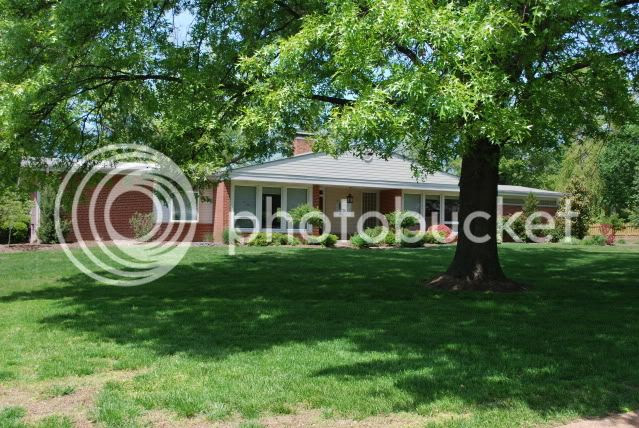 And that about rounds up this week's home tour! I can totally appreciate the decor and minimalism of many of the homes but don't think true minimalism is for me...I like my "stuff" too much--ha!

I am super stoked for this coming weekend's home tour featuring some of the most beautiful & oldest homes in St. Louis. Holy cow I hope they let me take pictures!

I am in LOVE with that teal kitchen! It is quite amazing!! Great tour!

I was going to say the same thing. Im not one for the minimalism here. I love your home. Its gorgeous, colorful, inviting and cozy. To me, these homes look "cold" and like an office or something. But thats just my personal opinion. Obviously, many people like that style.
Id prefer to do a tour of YOUR hoome instead::)

If I had like five extra houses, I would definitely do one in minimalism, but in my current house it just wouldn't work. I love getting to see into other peoples homes, because even though they might not be exactly my style there may be certain elements I can apply to my own home, like the long ledge. I really like that!

Minimalism isnt for me either. Those houses look more like lonely show rooms then livable homes. All i could think about while looking at these houses, is how much potential they have to be goregeous and lively :D

Megandvd@Beauty in the Attempt said...

This has got to be BEYOND fun to do! I love going into homes and "snooping." Great shots my dear...so when can you come to my little abode? :)

Ooo, this looks like fun! The only we have like this in our area is a tour of new homes built by contractors..and most aren't finished.

How fun! I love seeing how other people live... I need to check out my local home tours.

And that teal kitchen is crazy cool! I can totally appreciate this style but I don't think I could live with it everyday.

Great pics! NMS but neat to see other styles well put together. I liked the teal kitchen with brick floors!!

Hmmm. Not a fan of any of those houses at all.
Too cold for me.

How fun! I love all of the mid century modern furniture but the minimalist is not me. I need more (pillows & color) in my space to feel cozy.

i am with ya--not a huge fan of the minimalism--but that teal kitchen was rell cute:)

These are so fun to see! Thanks for posting photos! The turquoise kitchen is awesome!

These are really cool! I have to say, the last feels more modern than mid-century to me, but maybe it's just me. Interesting! But, it's my favorite of the bunch, too. I love that you got to talk to the homeowners.

And, I want that house number. So cool!