I don't think I've shared one "after" pic of our guest bathroom since moving in months ago!  It was actually one of the very first rooms I tackled since I knew I would only being making small & inexpensive updates to it.  Add to the fact that it would be the most used room in the house guest-wise and the quick updates were a no-brainer.

Here's what the room looked like upon move in: 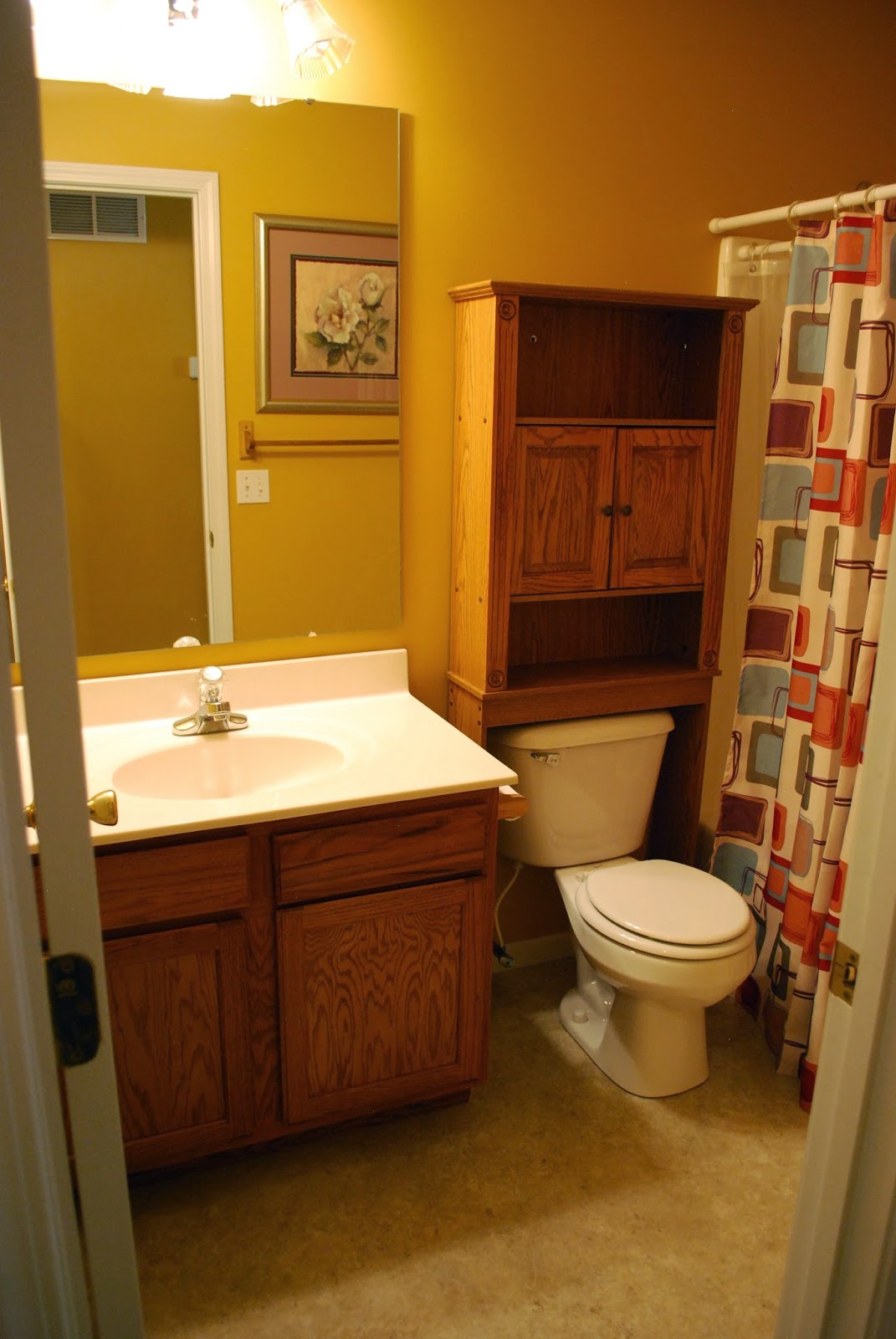 As you can tell, pretty much every last detail was basic builder grade. The main things I knew I HAD to do was paint the room + vanity, add hardware to the vanity, remove that behind-the-toilet storage piece, replace the shower curtain, update the mirror, change out the lighting fixture, and replace the faucet. It seems like a lot writing it out, but really it was done super fast and on the cheap.

I just put off sharing it because there are no windows and I don't have a tripod to get a decent shot. I have become that person who uses her iPhone for all pictures and I'm really not too mad at myself for that--haha! Laziness prevails!

Here's the room as of today: 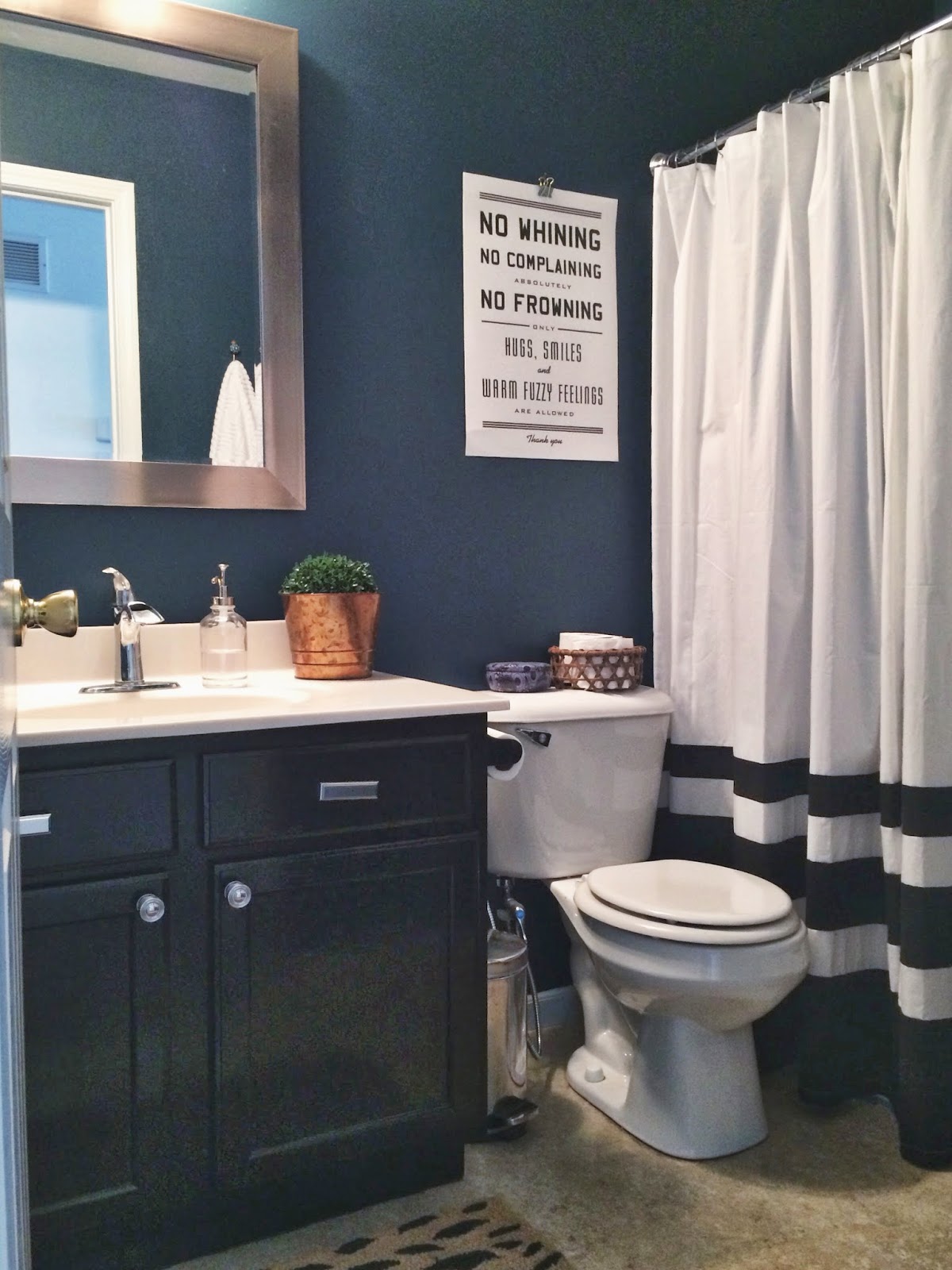 The pictures aren't the best, but you can at least get a feel for how it looks now.  I chose a basic black high gloss paint from Lowe's and handles from Home Depot for the vanity & used Benjamin Moore bathroom paint in Newburg Green. I can't recall if the faucet came from Lowe's or Home Depot but I know it was about $100 or so. You can't see the light but it is this one from Amazon, I think.

We picked up the shower curtains [yes, curtains--I like how a fuller curtain looks] from Target and the mirror is one we have had forever. 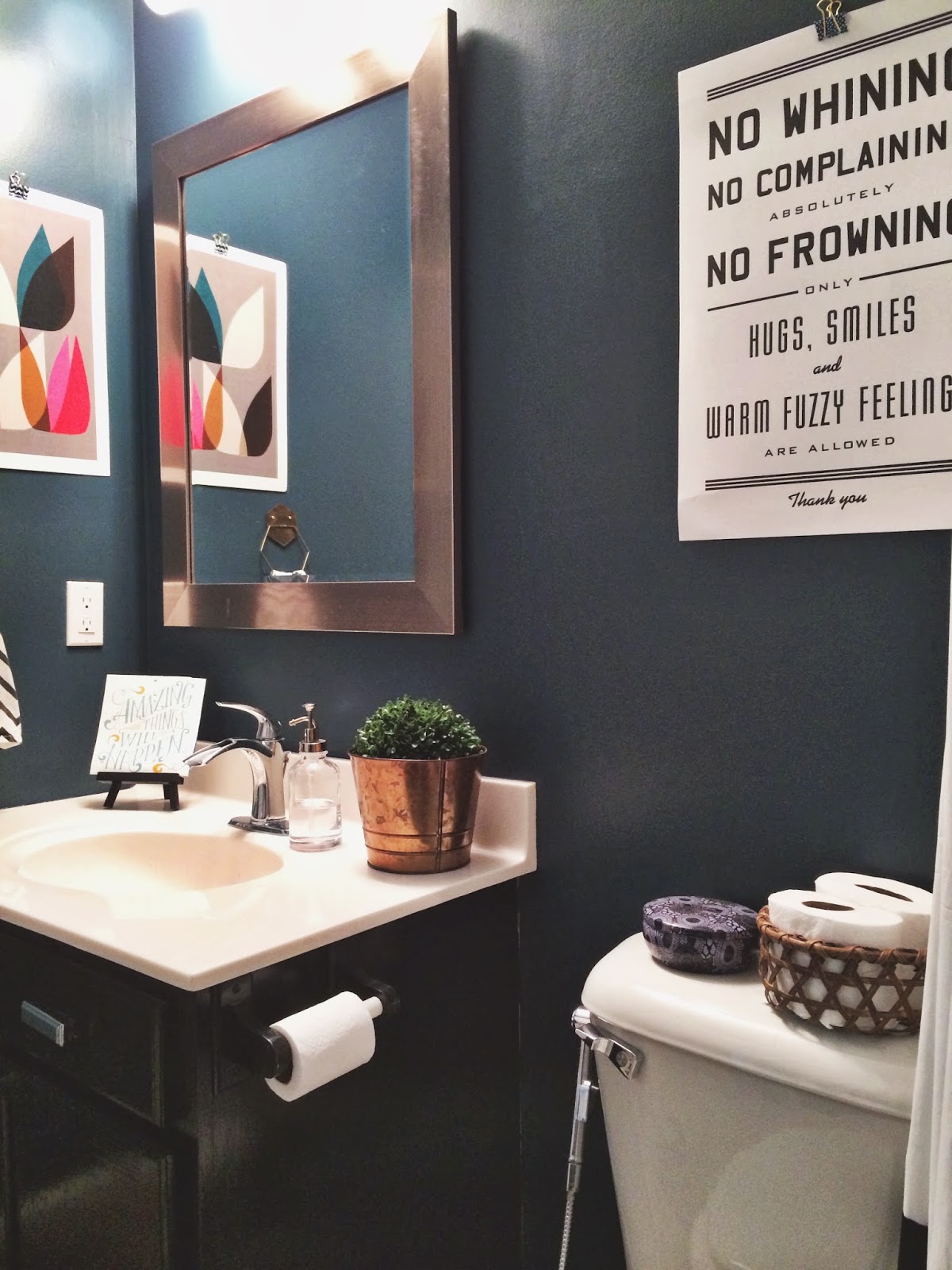 Most recently I finally hung up two prints I bought from Urban Outfitters months ago and just used some simple Target Threshold binder clips to hang them on the walls.  I think I want to frame the print above the toilet but it's an odd size so I've kinda stalled on that.

The gold towel ring is also from Urban Outfitters. If you don't shop at Urban for home decor you're missing out. Their selection is always fresh and gets updated what seems like weekly.  It's one of the first places I search when I'm on the hunt!

And in true Joi fashion, I worked a little animal print into the room with a rug from Rugs USA. 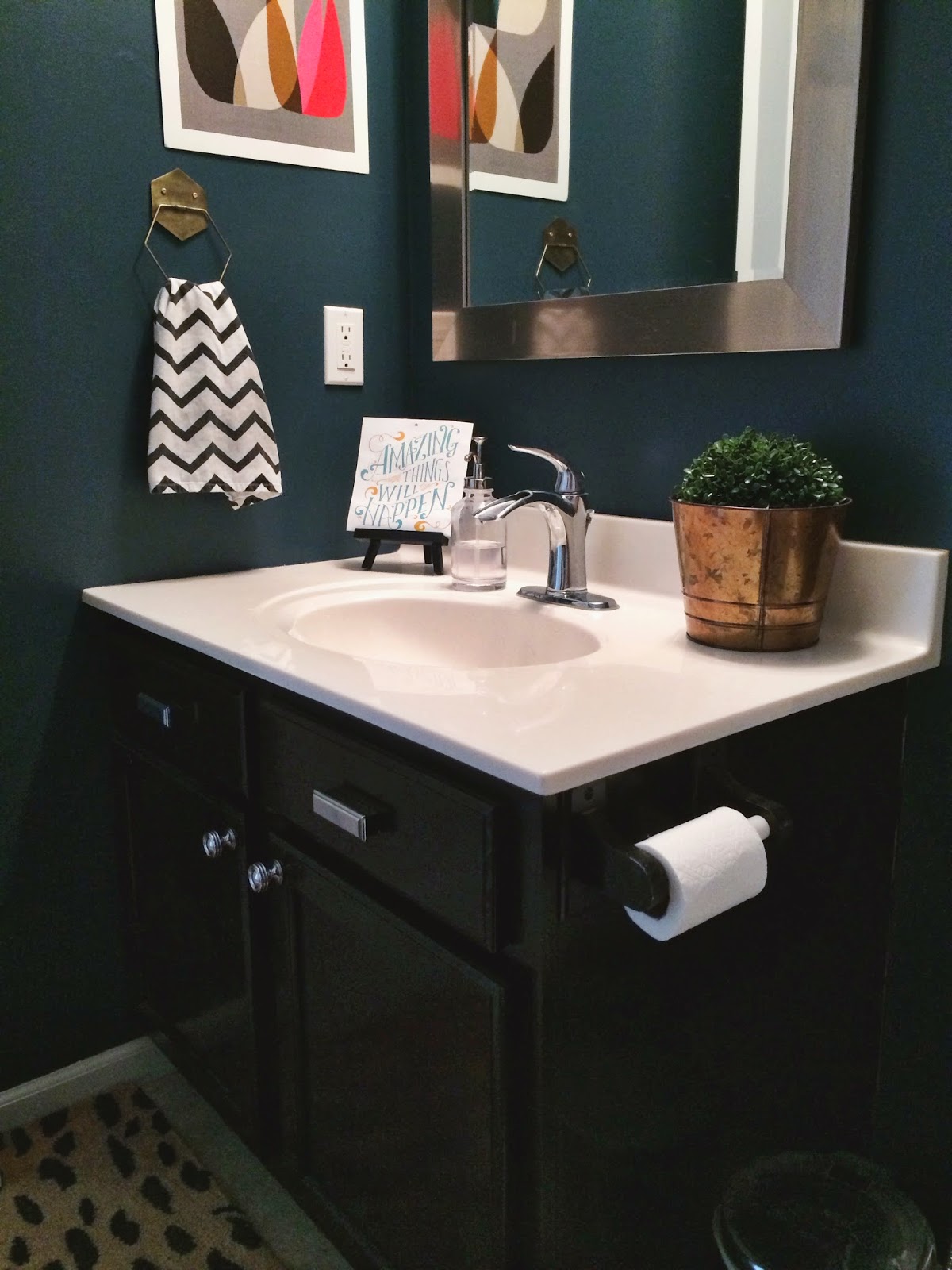 I still would like to replace the vanity, toilet, & vinyl flooring but I'm in absolutely no hurry to do so. I'd also like a better mirror, something like this, but again the one we have now is doing just fine.

We just keep moving right along in this little house of ours and I'm digging it!

Love this! It looks so different and the vanity looks like it will hold you a while until you pick a new one. I also completed some little changes to our guest bathroom last summer to hold us over for a while. Unfortunately, I never painted the vanity (though I still want to) because I couldn't decide on a color to go with the dark grey walls... Someday!

Pretty!!! So much better than the before. And you do such a great job of mixing prints and metals- I chicken out whenever I go to do that. You make it look effortless :)

Great update! Love that you used what you had and I always enjoy seeing how something so simple as paint can really transform a space.

BTW, Frameusa.com is a great place to order odd-sized frames. You can custom order any size of any style they carry, plus any size mat with any size opening. They don't ship free, but if you have a few things, it might be worth it. Certainly way less than having it done at a store!

Wow, everything looks so good!

That's an amazing improvement Joi. Paint, fabric, hardware and a great vision turned this into a stellar room. It looks great!

Awesome! What is the paint color you used on the walls?

Super cute and a HUGE improvement

It really looks amazing! I love the dark walls. I never would have thought to do that in a small room but it totally works. Makes it seem very chic, too.

it looks awesome!! I love the bold color. and I have looked at that towel holder several times, just haven't pulled the trigger...I think I need to shoot! I love it all!

This looks so awesome! I just painted my master bath a very similar color and love it. This is so beautiful!