We decided, very suddenly, to put our our sweet Niko Harper to sleep yesterday. 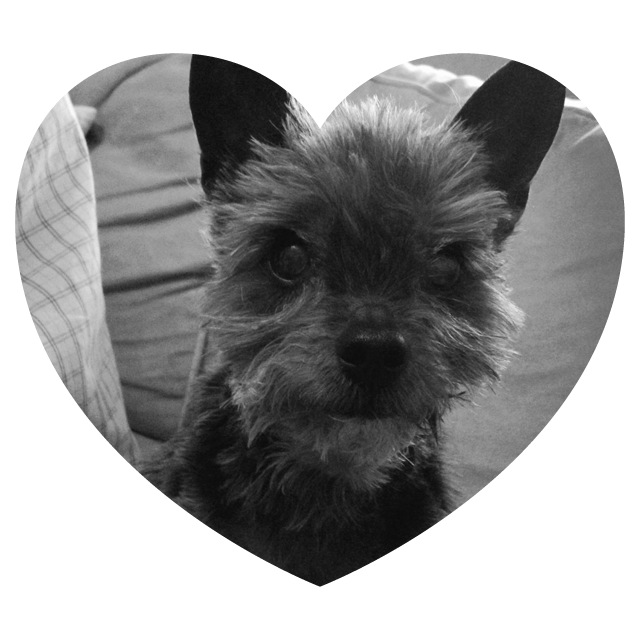 Niko's always been a high maintenance pup with all sorts of conditions but in the past few weeks we knew something was seriously awry.  He went from weighing over nine pounds to barely 7 and a half pounds.  This happened so quick.  Right before our eyes.

We knew something was really wrong when he started having trouble walking, barking, and eating.  We took him to the vet where she discovered his lungs were full of fluid.  She thought she could medicate him to  "fix" the problem but as he got worse she did tests on the fluid and found out it was cancerous. 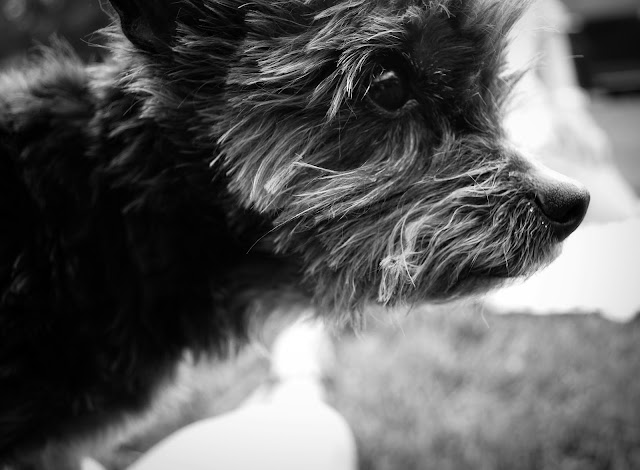 On Monday it was obvious as Niko got even worse and wouldn't eat or move that it was time.

I have only seen David that heartbroken one time in my life and that was when our best friend died in a car accident.  He was absolutely beside himself Monday night and Tuesday morning. 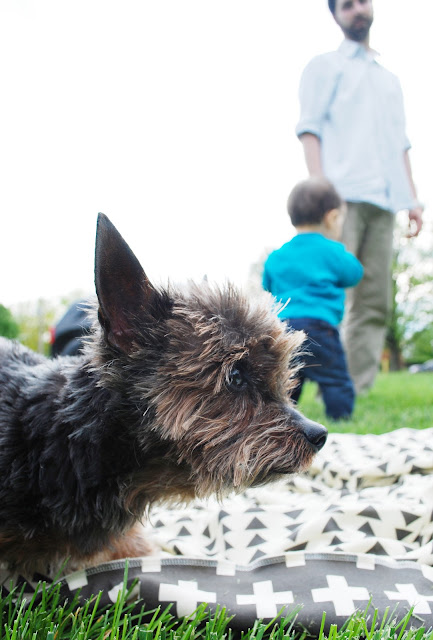 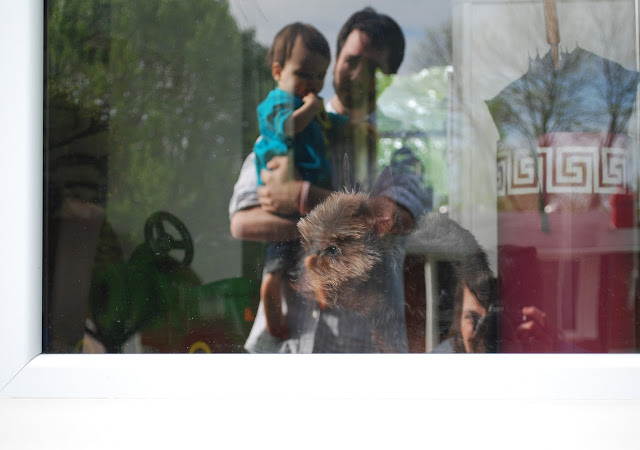 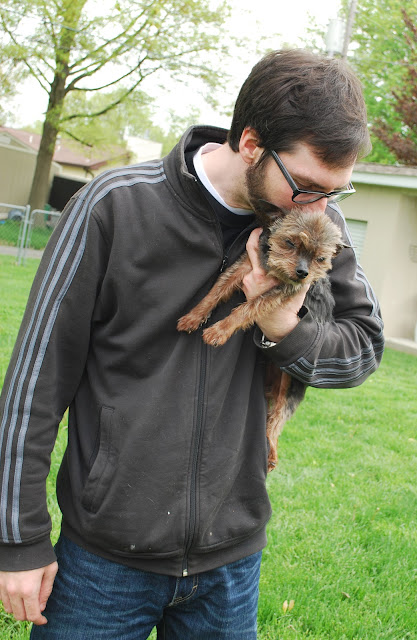 As he put it, "Niko was a bad dog. But he was OUR bad dog." He was David's first pet, and Niko was our first dog together.  We picked him out {he was the feisty little runt of the litter}, brought him home, dressed him up {against Niko's wishes}, forced him on walks, and put up with his crazy antics.  Niko was a momma's boy and a finicky little guy but I loved him with every inch of my heart.

He almost got me kicked out of my first apartment {I wasn't supposed to have a dog-whoops!}, he cost us nearly $3,000 in the first couple of months with his digestive issues, he begged incessantly, and humped everyone's leg all.the.time.  He was a hoot and an annoying little sucker, but again, he was ours.  We are missing our energetic pup before the cancer took his spirit from us.  What I wouldn't do to have him begging at my feet, barking during Theron's naps, whining to go outside a thousand times, or licking my feet even when I told him to stop over and over again just one more time.

When we brought our adopted puppy, Scout, into the picture I thought they'd never be friends.  But as time went on they formed their own special relationship and my heart aches that I can't explain to her where her buddy went. 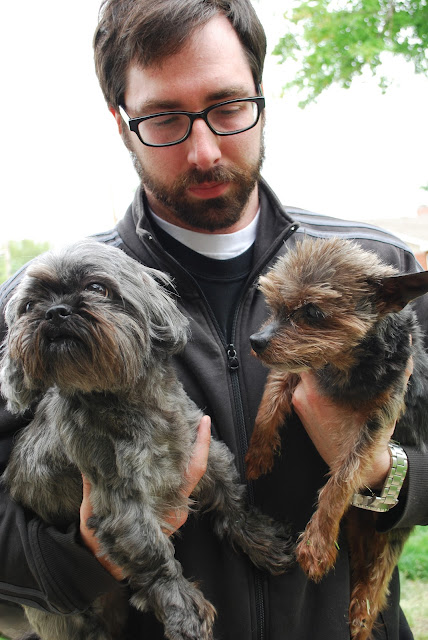 Most of all I am saddened that Theron will never remember Niko but that didn't stop me from snapping some pics so I can someday show him his puppy brother.  Theron loves petting and hugging the dogs and it is seriously the cutest.   Niko and Scout both put up with his less than gentle love pats and as any dog owner can attest to, that's why dogs are the best.  They lovs us unconditionally and without reason. They would do anything for us and no matter what, are our best friends. 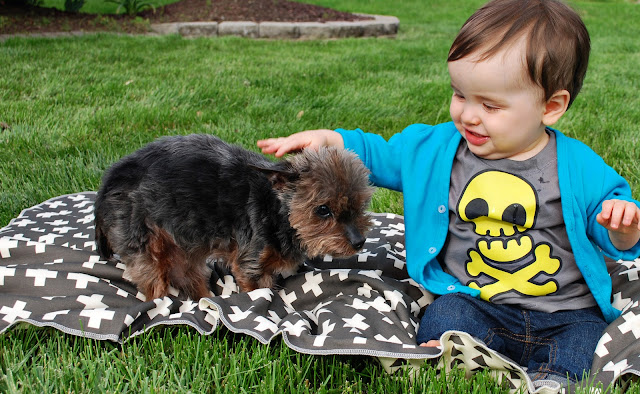 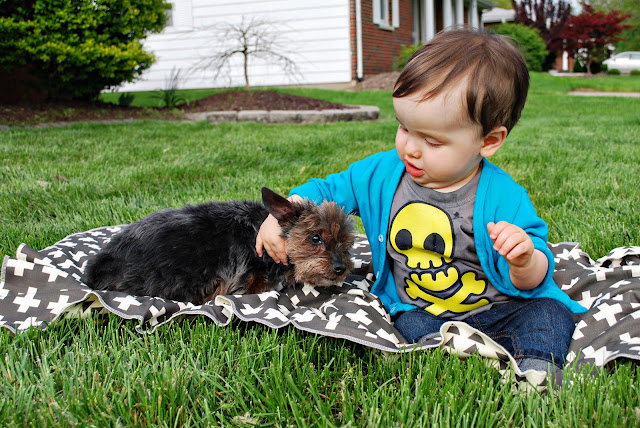 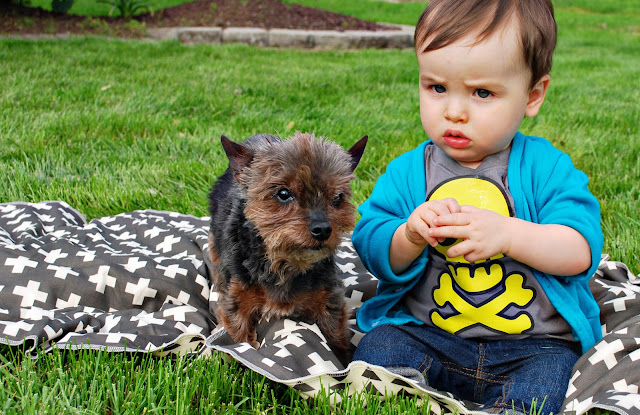 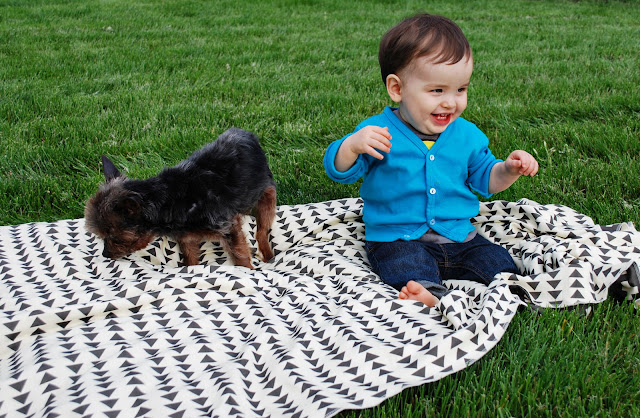 My two favorite boys, in my new favorite shot.  I am forever grateful I captured this moment. 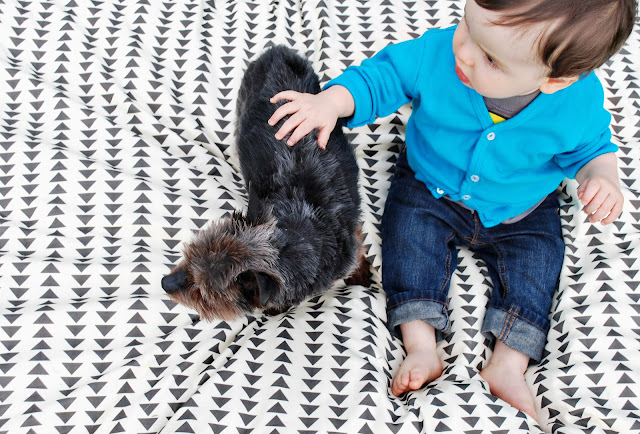 Tonight and for the rest of my life I will miss my best friend and constant companion.  He loved me on my worst days and never left my side during my darkest hours. 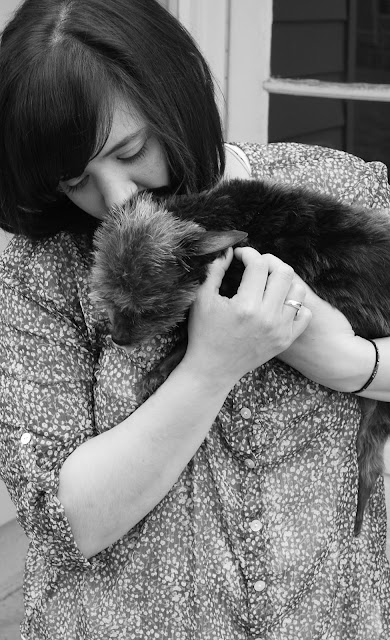 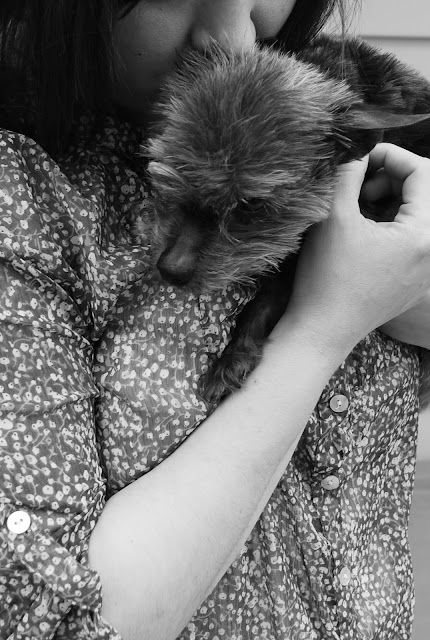 When Theron screamed during the first 6 months of his life Niko would sit by my feet and follow me from room to room to make sure I was ok.  I wasn't ok and I would apologize to Niko everyday for being so sad.  He loved us so much.  I only hope he knew we loved him the same. 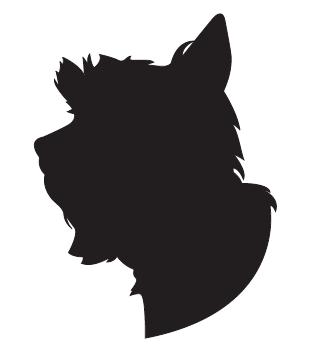 That was such a sweet tribute to Niko. I am so sad for you and couldn't help but cry reading this. That image of T and N is perfect. So beautiful.

I'm so sorry J. He sounds like a fabulous family member (funny, supportive and the stuff stories are made of). I know how difficult losing a pet can be so I hope you guys are okay. Thinking of you all.

Oh Joi, I'm so sorry I just cried reading this. What a terrible decision to have to make. My brother had to do the same thing with a pet last year, and he said that he felt like those kind of decisions are when you wish you were a kid again and you weren't an adult having to go through it. So so sorry -- I can't even imagine the pain you guys feel. Thinking of and praying for you, even though I don't really know you! :(

Well if anyone can read this without crying, I'll be surprised. So wonderful you were able to get these last photos and spend time with him. My favorite childhood photos are the ones where I'm a baby and my parent's first dog is playing with me or just watching me. I'm sure Theron will cherish them all one day! Sorry for your loss.

oh, i am so so sorry to read this. we lost our dog reese very suddenly over 2 years ago, so i know how hard it is. it does get easier, just keep holding on to all of the great memories. your family is in my thoughts.

Oh, my friend. No words can lighten yours & Dave's heavy hearts or take away the sadness, I know. Just know that I'm thinking of you & your sweet family. Though it might be hard to grieve properly, especially w/ a little one to take care of, I hope happy Niko memories will flood your thoughts.....and that Theron will be the light during this dark time.

Like you so beautifully wrote, Hiro was such a comfort during my darkest hours in those early days of motherhood. He was unconditional love, loyalty & a semblance of our simpler life. I still talk to him from time to time.

Since we've been blog friends for so long, I've always had a soft spot in my heart for Niko Harper. I hope the little rascal's wreaking just as much havoc up there somewhere. You gave him the best life.

I'm so so sorry, this is heartbreaking to read. So sorry for families loss.

I should never have read this on my lunch break! I can't get myself composed for my students! So so sorry for your loss..

It's so hard and even if you know you did the right thing, you just miss them so much. I am very sorry for your loss.

So sorry for your loss Joi. Niko reminds me of my little girl Sally and I can't imagine her not being in my life. She's getting older (7) and a little slower and it breaks my heart sometimes when I watch her have a little trouble getting up and down the stairs. I know her time is coming and like you, I don't know what I'm going to do without her :(

My heart is breaking for you. :( It sounds like Niko had a fabulous time in a fabulous home. I'm giving Ike an extra squeeze tonight!

I cried as I read this. I still have tears in my eyes. I am so so sorry for your loss. I cannot even imagine the heartbreak you are feeling right now. Your little Niko was so precious and I know he is in doggy heaven. He was lucky to get so much love during his life.

I honestly do not have the right words for you since I recently went through almost this exact same scenario. I did not have to make the tough decision you two did because Daisy's body couldn't make it anymore but neither situation is easy.
Just know that I'm here if you need someone to relate to. They are our first babies and forever a part of our hearts

Oh Joi - I was so heart broken for you when I heard on Instagram, but m heart broke over and over again as I read this post. It's never easy to make that choice. xoxo

I am so sorry for your loss. We lost our nearly 11 year old Boxer in January without warning. One day he seemed fine and the next day, he was extremely sick and 3 different vets recommended letting him go peacefully as soon as possible (based on numerous tests).

Our guy was a "money pit" with health issues his entire life ranging from spinal meningitis when he was just 3 months old to severe allergies, thyroid, etc. It didn't matter, he was our sweet boy and we would spare no expense.

His death was extremely hard on us and still is today. It makes me sad that our son (who was only 5 months old when our dog passed away) won't remember his special dog brother. He won't recall how his loving Boxer slept by his crib and was nervously concerned for him as he colicky screamed.

I have his memory forever in my heart though. You are not alone. Dogs are such important parts of our lives. (((HUGS)))

This was very emotional for me to read, Joi. I know first hand the loss of a family pet and the heartache that follows. But there is comfort in knowing they are no longer suffering and it was you that cared enough to set them free of the pain. Time will make it less painful and we move on but we will always cherish the sweet time we had with our little furry friends :) I truly believe when I say you have lots of followers who will be lifting you up in their prayers (myself included).

I am so sorry you are going through this. Pups become such a big part of our family, and I totally know what you mean about a dog being "your bad dog." Gosh, do my dogs do naughty things sometime, but I know it will be so hard to lose them.

Sending lots of love your way!

This should come with a warning, "you will cry".

Well written and we can tell the love that your family had for him. I hope you can get over this dreadful heartache; but keep him vividly in your memories.

i can't remember the last time i cried reading a blog post... i am so choked up right now. joi, i wish i could type the right words. i'm so sorry for your loss. niko was lucky to have owners who gave him a full and loving life while he was here, and who knew when it was the right time to let go. my thoughts are with you and your fam.

So so sorry for your loss...I feel the same about my Buddy, and I fear the day he has to go. But it sounds like you gave your little rascal a wonderful life full of love, and I'm sure he's looking down on you and the family from doggy heaven...

Oh J. I have tears streaming down my cheeks from reading your post. What a hard decision to make. I can feel the heartbreak in your writing. I'm so sorry. Big hugs! xoxo

I know this is late, but I just ran across this post and just wanted to say, I am so sorry for your loss. My dogs are the only thing that's been there for me through the last few years. I don't know what I would have done without them and I despair at the thought that I will some day be in this situation. Again, I'm sorry and I hope the last six weeks have somewhat healed the hole that losing Niko has left in your heart.