Hey guys! I was asked to participate in a MyColor inspired by Pantone Paint Party this week! Along with four other fun DIY bloggers, I will be showing you what I did with some paint they sent me. 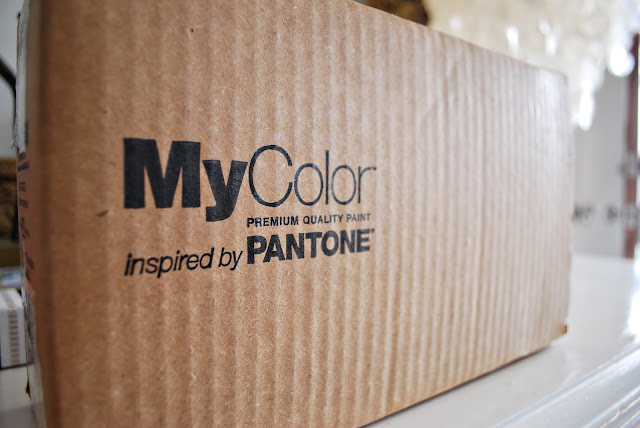 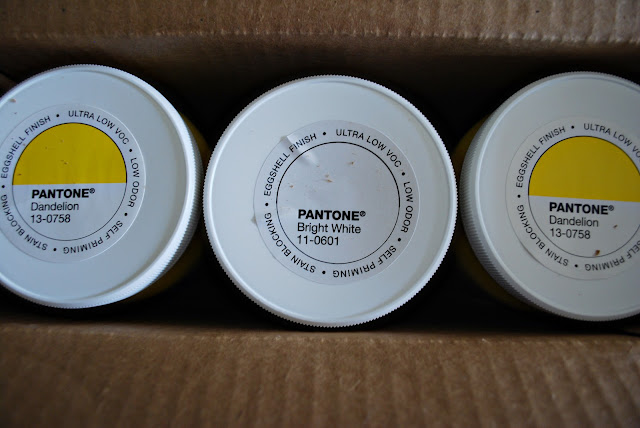 Earlier this week I showed you Mr. Theron Drake's playroom.  In it, was a table I painted a couple months ago with some chalkboard paint. 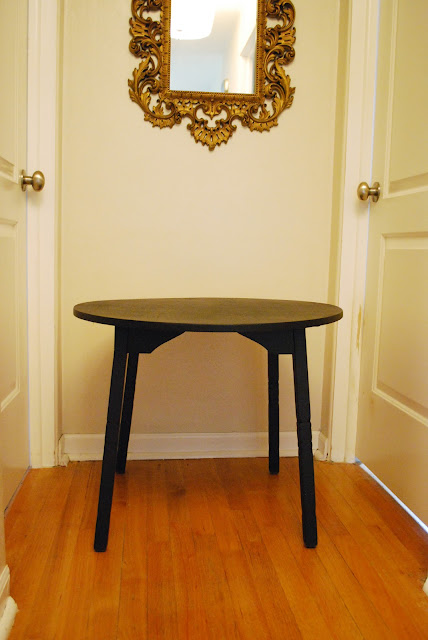 The table was formerly mine but I wanted to update it for my sweet boy.

When MyColor inspired by Pantone contacted me I intended on painting the dresser in the room but, with listing our house and potential house showings, that just didn't pan out.  However, I did decide to update the little table legs with some paint.  [I guess now think I gotta dip all of my furniture's legs--haha] 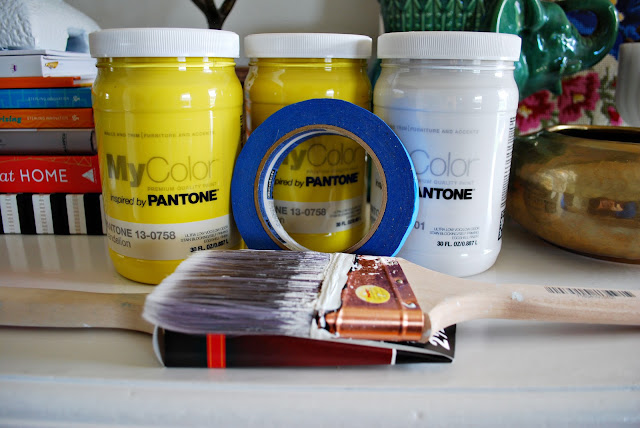 I started by taping off the legs of the table and painted three coats for complete coverage. The paint has a built in primer so I was thankful to save some time--especially since I tackled this during nap-time! 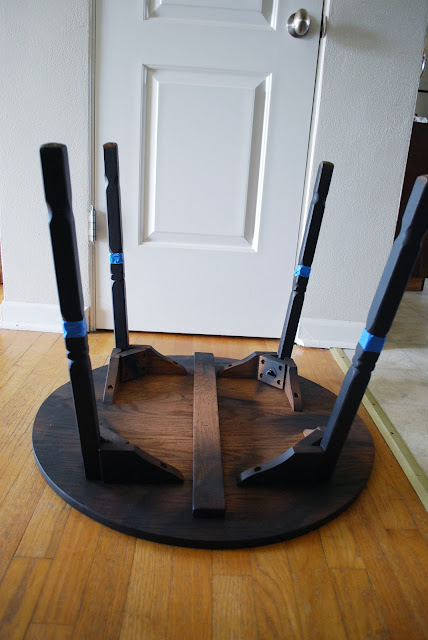 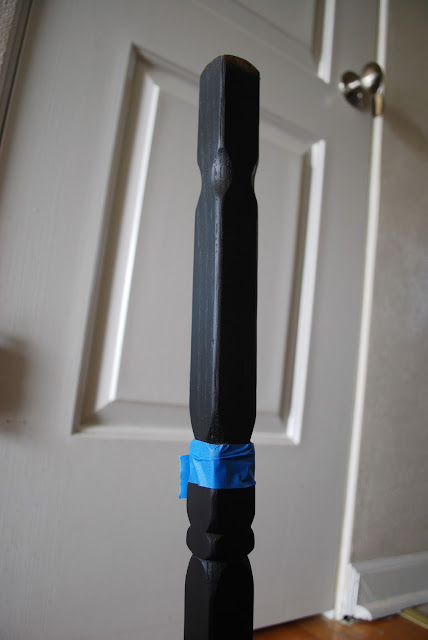 I didn't measure the tape height at all, but rather followed the detailing of the spindled legs and used that as a guide. 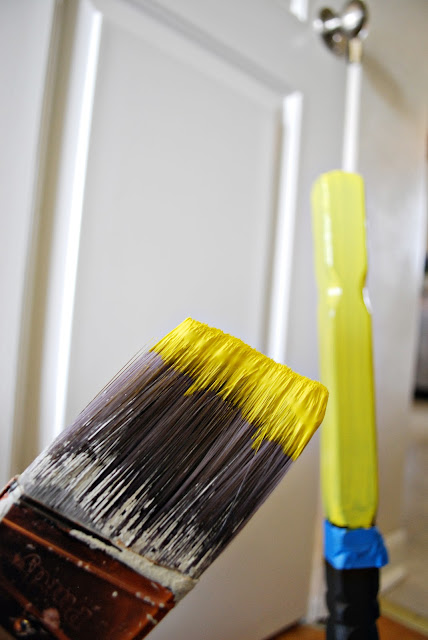 Once I was done with the yellow I removed the tape and retaped a little bit higher for the white color blocking. 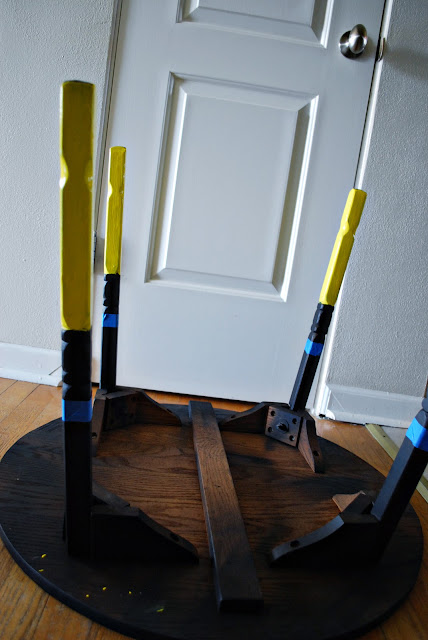 The whole project took me about an hour and a half and I had it back in the playroom in no time, even before TherBear woke up from his nap! 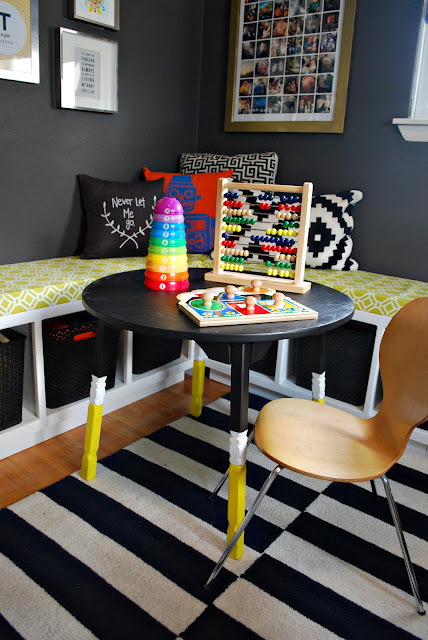 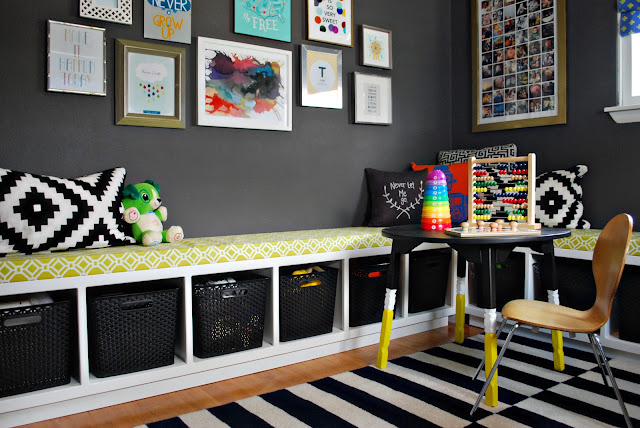 My project was extremely simple--not as inspirational as my co-party participants--but I hope it can inspire somebody to make even the smallest of changes for a big impact!

The MyColor inspired by Pantone Paint Party has been going on all week and ends tomorrow. Make sure to stop by these blogs to see what they created.

--Also, you can win some paint by leaving a reply in the comments section about how you would use MyColor by Pantone in your own project!

---For an additional chance to win a sample you can tweet and Instagram your project ideas to @MyColorPaints using #Passiton.

----You can ALSO like their facebook page for the whole schedule of paint party affairs and additional chances to win.

Now go comment! This paint is fab and the samples are HUGE!

The painted legs on the tale look cute. Such a sweet playroom! :) I love that the table used to be yours, making it extra sweet!

I just put up some beadboard in my pantry and have been trying to figure out what color to paint it - using only the paint I have leftover from other projects. Let's just say it hasn't been going well! A brand new Pantone sample might be just the thing it needs!

I would love to win! I have a dresser that I'd like to see a fun, new color!

I would love to use this on some of my end tables that are an awful shade of purple right now...

Love the table! I have a rocking chair that I need to paint still to go in my lil girls nursery and she is 8 months old! I better get on that!

I love that look! I was just thinking about painting my children's table, it could definitely use to be spruced up!

I could really use some paint for the new train themed room that my (soon to be) two (!!) boys will share! ;-)

A fun update, Joi! And a super sophisticated playroom, too! :)

SO CUTE! Love it! I love all the color in your house.

You dip good, girl. You dip REAL good. =] Now that I've made it awkward up in here, I would LOVE to win some paint. I would love to do this very same thing to Quinn's art table!

That looks awesome...now I want to paint the legs on our tables!!!!

That really looks cute... I would like to try it on some of mine...i got tired of those awful wooden colors....

This table is very cute and you have such great ideas!

This is awesome. I may have to try this!

The yellow and white add the perfect pops of color!