A couple months ago David and I had the pleasure of having our humble abode photographed for the outrageously awesome Apartment Therapy.

Ann and Dabney, the photographers, were two of the coolest gals around and took amazing shots of this little place we call home. In a weird twist, these two ladies were actually one of the three finalists in the St. Louis Living Space of the Year Contest. Such a small world, isn't it?

While they were here, they were kind enough to capture shots of Scoutie Bear and well, let's just say that sealed the deal for us. Dog lovers make for instant friends. : D 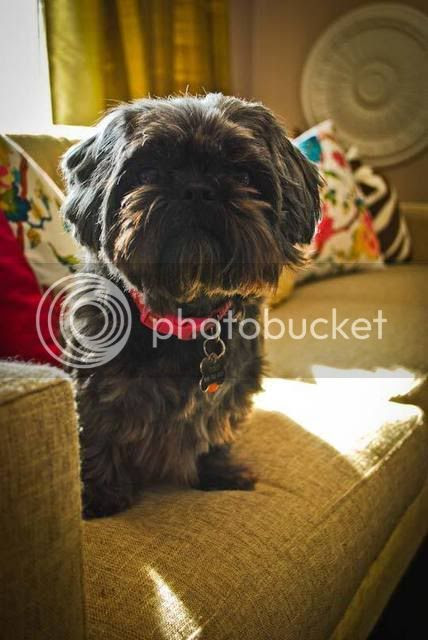 I was pleasantly surprised to get a tweet yesterday from a blogger friend who said they saw our tour as I think it was supposed to go live today! I hopped right on over and was delighted to see some pretty nice comments. 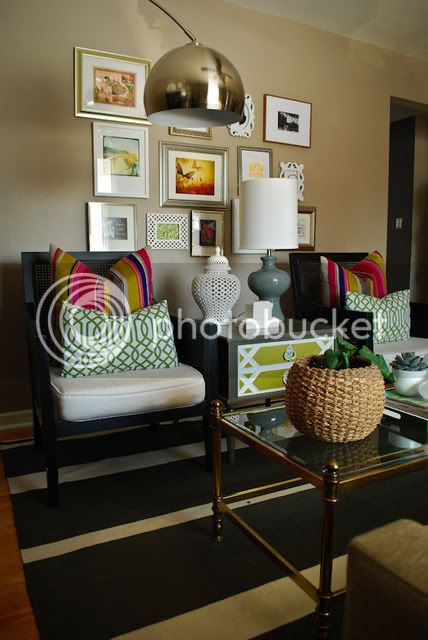 I hope you guys head on over and give it a gander. It was such a fun time!

Congrats! It looks amazing and you received some great compliments (sometimes AT readers can be a little harsh).

You have a gorgeous home and totally deserve all the press you've been getting lately!

Congrats on the Apartment Therapy feature :)

LOVE the tour!! (And what a cute photo of the pooch!)

Congrats again Joi your house looks amazing. What a treasure to have your home professionally photographed and featured!

Joi the apt. therapy tour is amazing.Your home is so fabulous. I love your use of color. I'm so glad the everyone recognized your talent and left great comments. Congratulations!!!

I've been reading your blog for a few months, and it's fun to see all of your house in one place. It shows so well all together. I'm impressed and inspired!
-Liz

I saw your post on AT and had to google your name because I knew an awesome blog had to be behind such a great house! Pretty much in love with your style.

Your home is so beautiful, and the photography captures it so well! Congrats on the well-deserved feature. So exciting :)

Oh my goodness... Can I come live in your house? I love love love the balance of color and pattern. You really should quit your day job! Amazing!

LOVED the tour! Your house is so beautiful and everyone's comments are so great! Congrats :)

I have always loved your home, but seeing all of the photos together over there, and spots we really haven't seen before, made me love it even more! Congrats on the well-deserved feature!

your home is so gorgeous. congrats on all the great work you've done!

I have seriously never seen such a mass of positive commentary on AT! Pretty impressive, girl! You rock.

You are amazing and as always your house looks spectacular! Congrats on the latest photo shoot and magazine layout- you deserve every second!

Congrats, Joi! I've been following your blog for a long time(but never commented, until now)- it is so exciting to see you getting this well deserved recognition!

OMG that is so great! Expesh great to have wonderfull pics of your home and Puppies! Too cute- Scoutie Bear. XX Samantha

I am heading over right now. AT can be a bit brutal sometime.

@Everybody-You guys are the best!!! Thanks for always being so supportive and sweet! : )

Scoutie Bear is a natural star!

So happy for you! All of your hard work is paying off! Thank you for showing good design is accessible and feasible for everyday girls!

Loved the tour! We have totally different tastes..but I love what you do!

Congrats on the feature!! Your home is gorgeous and SO fun and eclectic ~ I'm not surprised at all that they wanted to photograph it. :)

so exciting! of course i love your casa, and fabulous style~ it all looks fantastic!

Congratulations Joi, you guys deserve it! Wahoo! For sure one of my most favorite houses:)

I love your place and Scoutie Bear is just too cute! Miss Walker xoxo

YAY! So exciting, going to hop on over right now!!

Congrats!!! This is so well deserved! :)

lovely AT tour. Had a question, what color paint did you use in the hall -- looks like a nice warm white? The hall runner source? Many thanks. Stephanie

Yay! The photos are AWESOME and I'm happy to see that there are so many kind comments. Some people are just mean, but you seemed to have bipassed those. Congrats!

Congratulations!!! I recognized your place right away on AT and I had to come straight over here to say congratulations.
That's awesome.

Great AT Tour! Quick question - what happened to your other white couch that was in your living room?

i LOVE color..but have pretty much none in my house because I have no idea how to mix it all up.

i have your house tour saved to my favorites bar...THAT is how much i love it!