On A More Serious Note

This is my husband and my best friend, David. 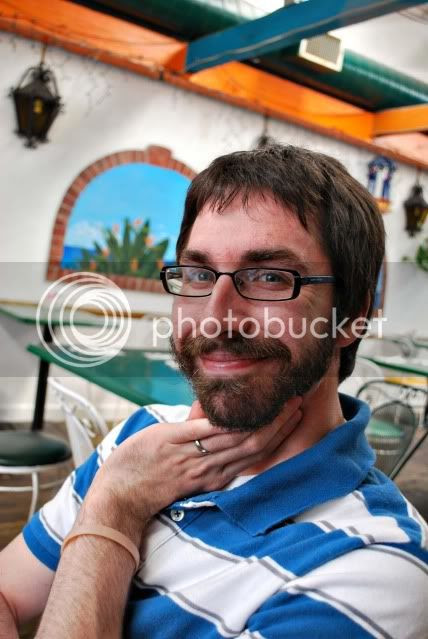 For awhile now he has been having what seemed like non-threatening chest pains. They'd come and go and didn't seem like a big enough deal to get checked out; they appeared to be more of an annoyance than anything else. Recently when he had one of those same sorts of pains in front of my family, it didn't go over so well and let's just say less than 24 hours after that he had a doctor's appointment scheduled.

Fast forward to Wednesday and Dave went to see the doctor. I slept in because it's summertime and I thought it'd be a quick check-up and an "Oh, you're fine" diagnosis.

Turns out, I was wrong. The doctor is concerned for Dave because his blood pressure may be borderline for hypertension {they'll do more screenings to confirm} and thinks that the pain he is having in his chest may be the signs of something more serious. : (

At his appointment Dave got an EKG and it came back pretty normal except for that his rate was somewhat low. I don't really know what that means but Dave said that the nurse said it was better than his rate being high. So good news!

On this coming Friday Dave is going to the hospital for a CT scan, blood work, and a chest x-ray to see if the doctor can rule out an aortic aneurysm. Yup, you read that right...and that's what has had my mind and heart all worked up for the last 24 hours.

This doctor is being very cautious because he had a patient in the past, similar to David's height and weight, who had the same symptoms and went undiagnosed with an aortic aneurysm and then died suddenly.

My paternal grandmother didn't have this particular type, but she too, died of a sudden brain aneurysm.

So it's safe to say that I'm extremely scared but hopeful at the same time. I desperately want my best friend and husband to be a-ok! I promise to keep you all updated and would appreciate any prayers you could send Dave's way. ♥

Oh, and I am definitely going to the hospital with him on Friday and most likely every appointment for the rest of his life after that!

OMG! We will absolutley be keeping you guys in our thoughts and prayers this week! I hope everything turns out better than expected on Friday. keep us posted!

Keeping you guys in our thoughts and prayers that he gets a clean bill of health tomorrow. I've had 5 aneurysms on my dad's side (brain) so we've been down that road. Keeping our fingers crossed for you guys.

I'll definitely be keeping you in my thoughts. My father has an aortic aneurysm and I constantly live in fear of the worst. Let's hope it's something MUCH less complicated and dangerous. Hang in there.

I get kisses said...

My prayers are with your husband and I am sure everything will be fine.

Joi--I can't imagine how worried you must be, but I will definitely pray for him and that everything will go great on Friday.

Sending prayers your way right now, I don't know either of you but I am tearing up right now..It's so unfair when young people have to worry about our health like this and can't just live life...I hope and pray everything will be just fine with your husband Joi.

Catherine @ waking up with you said...

That's pretty scary stuff. I hope Dave is okay and that the appointment goes well on Friday. Wishing you guys all the best.

I'm sure everything will turn out fine. I'll keep you guys in my prayers!

Will certainly keep you all in my prayers. I'm sure all will be okay. So scary!

Dave&Joi- I'm thinking of both of you and praying for good news from the doctors. I'm really glad he made that appointment! Love you guys! And keep us all updated :-)

We will be sending lot's of warm thoughts and prayers. I know that must be so scary! Hugs.

I'll keep you in my prayers. Everything will turn out fine.

Joi, that's so scary! Keeping ya'll in my thoughts and prayers.

Oh, Joi! I will keep you and Dave in my thoughts and prayers until you get the results back!

I will be praying for you and David.

Oh, Joi! I will keep you and Dave in my thoughts and prayers until you get the results back!

You and Dave are in my thoughts and prayers. Hang in there!

Oh gosh! So sorry you guys are going through this! I'm praying for you right now!

My prayers are with you and your husband. Hopefully, with youth on his side, this will be but a minor obstacle in his life. Lots of prayers and positive thoughts!

Oh, my. I will for sure keep you guys in my thoughts and prayers.

Oh, my. I will for sure keep you guys in my thoughts and prayers.

Oh wow, Joi. You guys are definitely in my thoughts and prayers!

you all are in my prayers!

My thoughts and prayers are you and your husband / best friend. I pray everything goes smoothly

I will be thinking of you two and sending my very best good vibes your way. That's so scary, and I hope all turns out okay!

I'll be keeping you guys in my thoughts and prayers!

I will be lifting him and you up in prayer. Please do update us. =)

Sending out prayers and well wishes for your sweet husband! Hope everything turns out okay! :)

Oh no! My thoughts & prayers are with you and your husband.

Oh, no. That's terrible! I am so sorry, but I am sure everything will be fine.

i will be thinking of you both, and i hope all goes well tomorrow. You are in my prayers~

Just finished praying for you and David. I can't imagine how scary this news must be. Praying for good news at the hospital tomorrow and for peace for you guys and your fams! Keep us updated!

My thoughts and prayers go out to you and your hubby - no matter what they find atleast they are catching it now and you are able to treat whatever it is instead of there being some awful sudden health issue later on - good for him for heading to the doctor - and good for your family for pushing him to see someone. My best wishes.

Oh my! This must be so scary. Thank goodness he went to get it checked out and the doc is being cautious. I'm sending good thoughts your way.

Just said a special prayer for you guys and you will stay in my thoughts and prayers. I can't even imagine the stress you are going through. Awhile back J had some tests done to ensure he didn't have testicular cancer. That kind of worry can really drive you crazy. Anxious to hear tomorrow's results!

Loving light and prayers to you both. please keep us updated.

how scary! :( i'm so sorry to hear this. i hope everything looks okay after the appointment. i can only imagine how much you are thinking about it! let us know how it goes.

Yall are in my thoughts and prayers. I just took a moment right now to stop and pray a good prayer and its DONE. Claim that he is ok...will be okay...and all is GOOD!

I'm sure everything will end up ok. Just make more healthy meals in that beautiful kitchen and snuggle more in your awesome house! ;-) You will be in my thoughts and prayers.

Oh - I'll be praying for you both!

Joi, I'll be thinking of you and Dave, hope that everything is okay!

Mom of 2 Cuties @ Sprinkles of Joy and Laughter said...

Good Morning and I truly hope it is a good one for you both. I'm just catching up on my blogs and found out about your worries. Sending prayers and good wishes your way. It is a blessing that he had signs and you all are not ignoring them. I lost my brother suddenly when I was 13 and he was just 21. Heart Disease knows no age.
Hugs
Maureen

My thoughts and prayers are with both of you.

oh my goodness... i hope everything turns out OK!

Stay strong!! My thoughts are with you- hoping everything will be ok!

Joi, my dear, I am NEVER not checking my blogroll ever again while I'm on vacay. Because I miss important posts like these that make me feel terrible for not knowing sooner! I wish I could give you and D a HUGE virtual hug for enduring this scary ordeal.

I hope D's still continuing to do better. I'm here for you through and through if you ever want to "talk"!!