I posted a couple sneak peeks of our little guy's nursery a few times in the past 6 months here and here.

I had decided on a rug that I loved but then in the 11th hour something wasn't jiving and I made a switch to this rug from World Market that was on super sale. In my opinion you can't go wrong with black and white stripes ever! I like it so much I also have it in the living room, although that one was from IKEA long before World Market started carrying their version. I guess you can't have too much of a good thing.

I took some pictures last week while waiting for this babe to make his arrival and I'm mostly pleased with how they turned out. I ultimately wish I would've painted the room a cooler shade of white when we first moved in but oh well! The fan light puts off a yellow tone but then when you open the blinds it's too blown out. If I were a better photographer I'm sure neither of these issues would be a problem but, alas, I am not.

I still am very smitten with the geometric wall we DIYed [completely stolen from here] and the way we reused almost everything from Theron's nursery.

So without further ado, here's where our littlest bundle will hopefully play and sleep!

I wanted to add a large "T" over the crib but struggled to fine one in a font I like. I think I am going to ask my father in law to build an oversized shadowbox "T" like one I saw at HomeGoods awhile back! 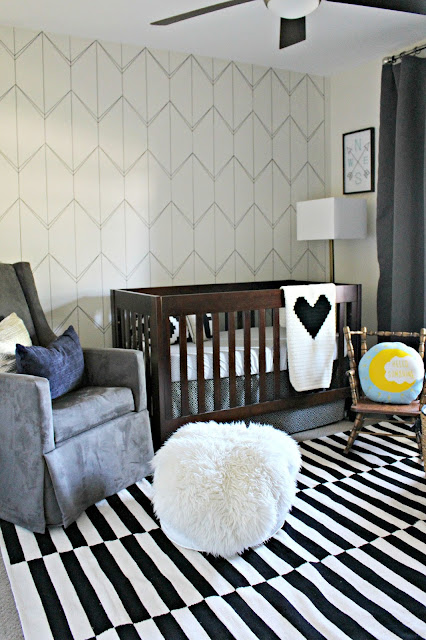 The silver letters were from Michael's this summer, the large tapestry was from Society 6, the ferris wheel is an old CB2 find, and the campaign dresser was a Salvation Army thrift store score! 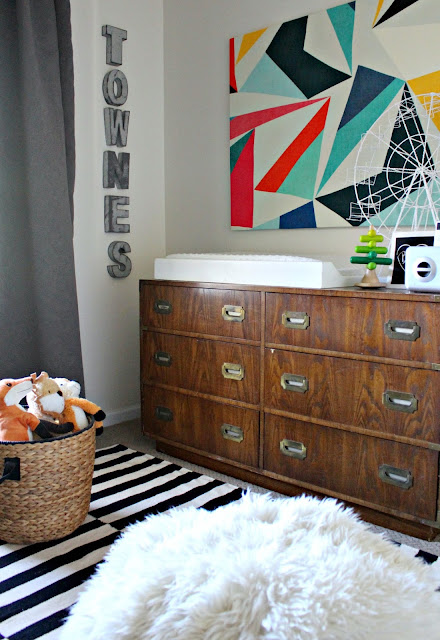 The "Be You" print is actually a washcloth from H&M and the iPod dock I scored at a garage sale! 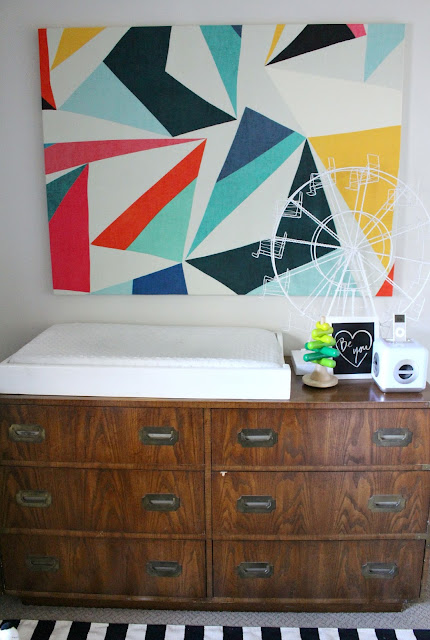 I love all things hearts and even though I have boys I think hearts can be used for them too! The blanket is from this Etsy seller [and is so affordable compared to others selling the same thing!] and the pillow is from Land of Nod. 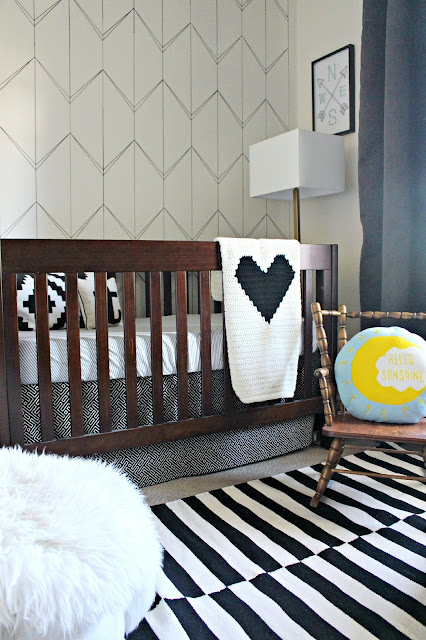 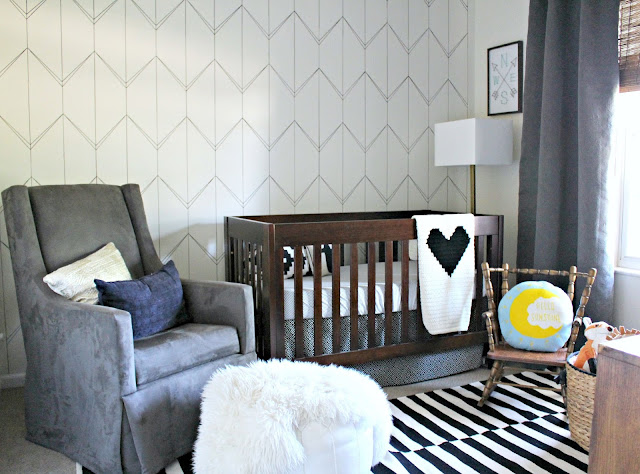 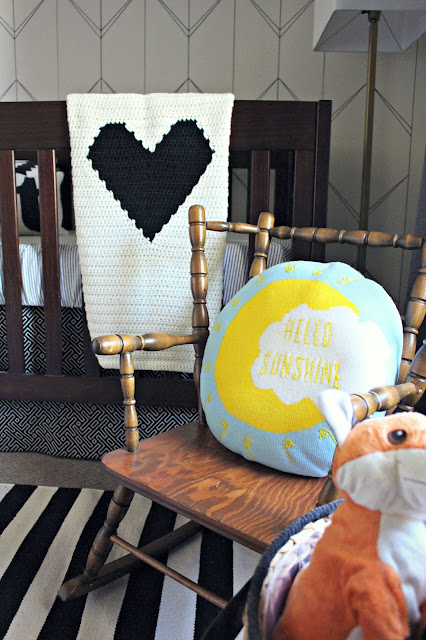 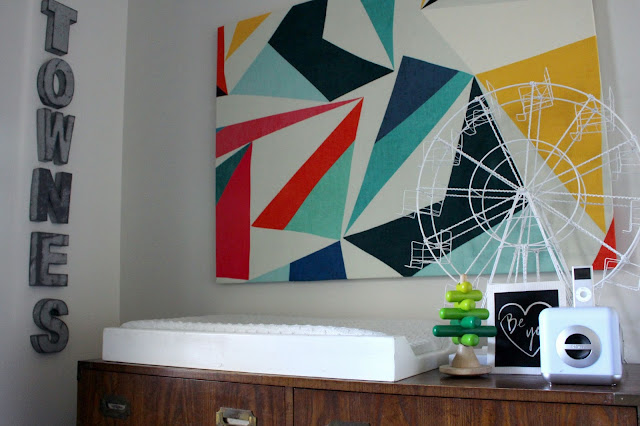 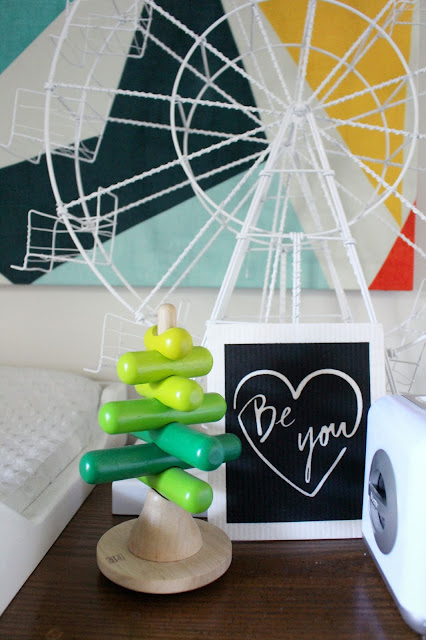 The arrow string art was a random find at Target just last week and the lamp was from CB2 that used to be teal before I made it gold! 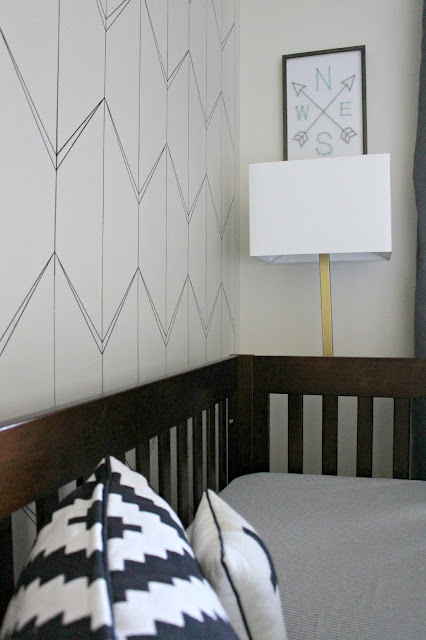 I've also been working on hanging a collection of frames in the hallway and I love this little view you see while sitting in the glider! 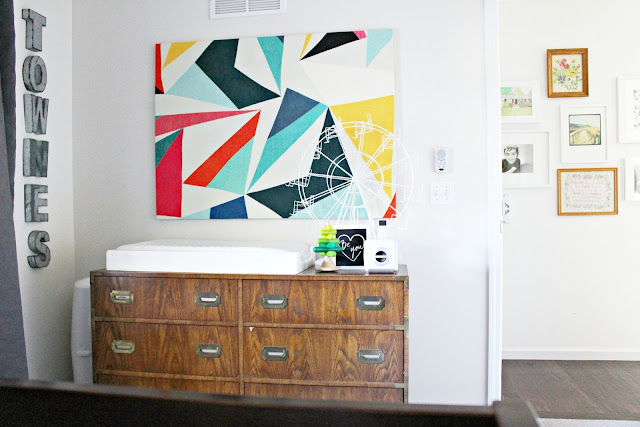 There you have it, guys! Thanks for stopping by!

LOVE this! Being partial to little boys myself I always love to see how their rooms can be made super sweet and cute but not overly cutesy or themed. This is so cool and modern but still baby fun. The tapestry is such a fun addition!

This is such a gorgeous room - it's fun and whimsical, but also really chic. Totally not surprised since you are the raddest of all.

Where did you get the crib? I really was set on the black Jenny Lind style from da Vinci, but my dad is throwing a fit about it being 'made in China'. I'm having a hard time finding something simple, but reasonable.

I love little T's room!! I am going to have to look at Target for the string art thing for William's room...I love that!!