As you may know, the guest room is getting a major overhaul. Things are coming along quite nicely and I just need to get another lamp shade, new mirror, and west elm block art {which has been ordered, but is on back order until November!}.

Tonight I took on another DIY art project from which I drew inspiration from my favorite little DIY magazine that I've raved about in previous posts. Who knew I could be so crafty?

Here are the magazine scans showing you the paint swatch art above the bed. Basically, it's as obvious as it looks....arrange some paint swatches in the colors and sizes of your choice and voila--new art! I took a couple different trips to Lowe's and Home Depot so I didn't look like such a freak taking 100's of swatches at once. I loaded up on all sorts of shades of creams, whites, greys, yellows, some pinks, taupes, tans....and well, the list goes on and on. 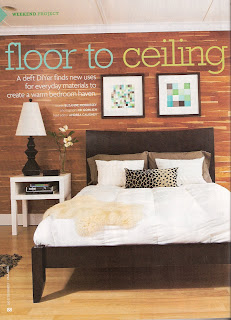 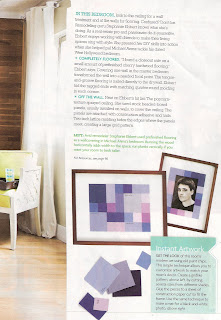 I liked the way the magazine had the art set up in a mosaic form on the left and a bigger block form on the right--I'm not one to mess with a good thing, so I pretty much followed their lead! 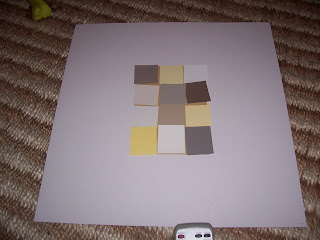 Here are the finished products in all their framed glory! Let me tell you, the little squares one was the most tedious to space out correctly {dang math--that's why I'm a Spanish teacher, folks!} and glue on just right! 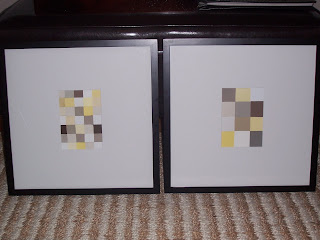 And here they are hanging in their new home. I thought I wanted to paint the frames white, but I'm kind of digging the black--oh and David chimed in saying white "would look dumb." Don't you just love a man's opinion? It's a slow process for me to be OK with everything not being so matchy-matchy, but I'm coming around : ). 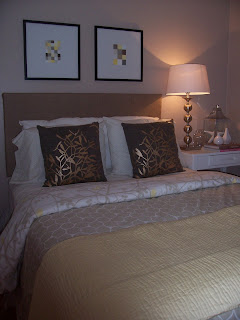 It looks great, as always! Love ya!

such a creative idea - and the colors look great in your room!

I LOVE IT! What a fab idea to use paint chips.

I am so adoring this room so far! It's so chic and serene. Hey, are those the Target pillows? They look so perfect on the bed! =)

That looks SOO good!!! I really love it!

that is cute i have tons of paint swatches from doing my house, neat idea and your room is so cute!!!! What are you going to do when you get all your rooms done???
jane

Perfect! I like the black frames too and the pillows are gorgeous!

Thanks so much everyone! All your sweet comments definitely put a smile on my face.

FC--yup, those are Target pillows!
I love me some Target : )

What a cool idea. What a great guest bedroom...only problem I see will be figuring out how to get your guests to leave!

I saw that article too! I was hoping to use the idea for our guest room! Yours look great!

That looks great! Way to go! Martha Stewart seriously has nothing on you, my dear!

I love these!! So fun and colorful and modern-looking. I decided to make one of my own, and gosh, it took a lot longer than I thought it would. But it's pretty cute, I think. You can see it here: http://heartmainehome.blogspot.com/2011/02/diy-paint-swatch-art.html

I hope you don't mind, I included your photo as inspiration (with credit, of course) and linked up to your post. If you'd like me to take the photo down, please let me know.

Thanks for passing along this great idea!