Every year Dave and I buy pumpkins to sit outside. Every year they go un-carved. This year we, well I, decided this pattern needed a change! Thus, we carved our very first pumpkins since the eight years we've been together this past weekend.

It was super fun and funny to watch Dave freak out at the pumpkin guts; he didn't do much of the carving, or rather any at all, because he didn't want to touch the insides! He, however, was the perfect assistant! : )

We started with our big pumpkin and our $4 carving kit from Wal-Mart. We both read the instructions because the last time either of us had carved a pumpkin was years ago, lots of years! 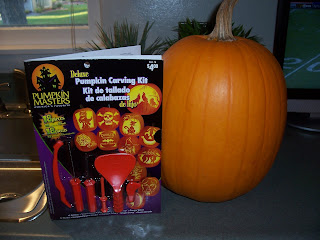 I knew I wanted to use our last name monogram as the first design. Dave and I decided on a whimsy letter "S" and I traced it on the pumpkin and removed all the insides. 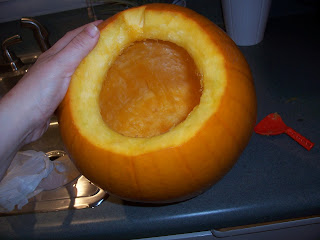 Dave then posed for a picture to prove he was in attendance! 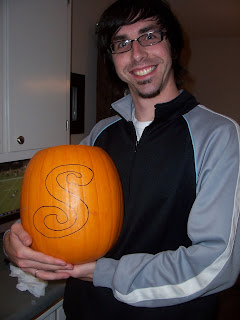 The actual carving was easier than I had anticipated--which was a good thing! Here's the finished product! 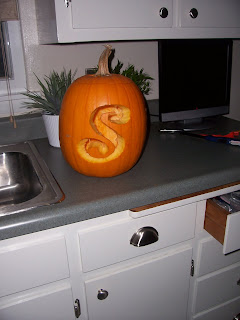 Since we always buy three pumpkins every year {one for Dave, one for me, and for for Niko}, I wanted to carve another one. The booklet that came with our carving tools also had sample designs. Most were of your typical halloween-type scene, which really isn't our scene.

However, one stuck out that I thought was just too cute and perfect for me! Some may think it's super dorky, but I love it and use the symbol way too frequently on the 'net! 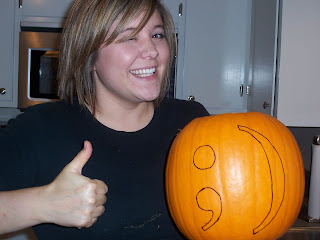 Here are our beauties sitting pretty on the front steps! 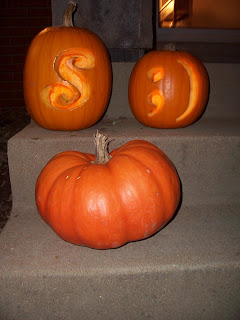 And here's a shot of them in the dark! By the way, since I'm your biggest worry wart, we purchased the LED lights that appear as real candlelight since real fire was not a contender for this girl! 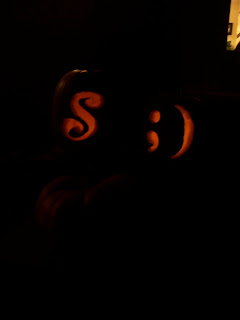 I have one more design in the works, but it requires a different pumpkin because the one that's left isn't the right shape. Details to come if I finish it in time! : )

Have you carved your pumpkins this year? If so, share the details and tell what you designed!
Posted by Joi at 11:03 AM

WOW I've seen those LED lights for the pumpkins but never thought they would work so well!! I will have to pick some of the up!! Love you winky pumpkin! Very clever;)

cute! I need to get off my ass and do that too!

You guys are too stinkin' cute! Love the punkin's.
(Hey, my kitchen's starting to resemble yours!)